Shaaban: Western claims about use of chemical weapons in Ghouta reflect state of confusion 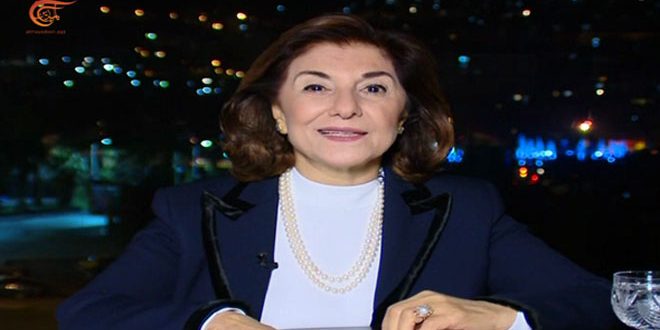 In a statement to al Mayadeen channel on Wednesday evening, Shaaban said that the accusations raised by the French Representative to the UN concerning Syria’s non-commitment to UN Security Council resolution no. 2401 seem to be detached from reality; in the sense that the majority of civilians in Ghouta are held as hostages by terrorists there.

Western claims about use of chemical weapons and severe humanitarian situation reflect a state of confusion due to the achievements made by the Syrian Arab army, Shaaban added.

She stressed that Syria and its allies will continue fighting terrorism till the liberation of all Syrian territory, underlining the importance of restoring the Eastern Ghouta to protect civilians in the capital Damascus from daily rocket and mortar shells fired by terrorists.

“We didn’t hear western condemnation neither of the continued bombardment on Damascus city, nor the martyrdom of innocent civilians by the Turkish regime forces in Afrin or the besieged Kefarya and al-Fou’a towns in the countryside of Idleb,” she further illustrated.

The Presidential Advisor noted that the Human Rights Organization as well as other UN organizations have lost their credibility as they have never relied on reasonable facts or trusted information.

claims Shaaban western 2018-03-08
ghossoun
Share
Previous Temperatures above average, rain expected
Next Army advances in the surroundings of the al-Muhamadyia town, foils terrorist attack on its posts in Ghouta