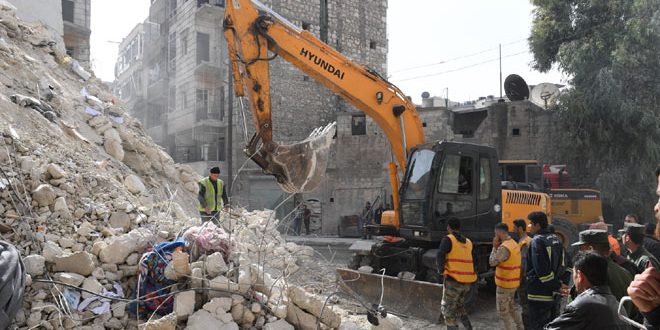 Aleppo, SANA – Three people died, another was rescued, and five are lost as a result of four-story building collapsing on Monday in al-Safa neighborhood, as the Civil Defense and City Council are working to find the missing people while clearing the rubble.

A source at the Civil Defense Department told SANA’s reporter that three people from one family; a father, mother, and their son, died in the incident, while a second son was rescued and his condition is stable.

Civilian sources said that the building was partly inhabited, as 3 families lived on the first an 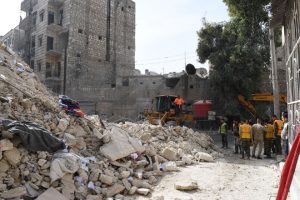 d fourth floor, adding that five people are still under the rubble.

Aleppo Governor Hussein Diab visited the scene of the incident, asserting that no effort will be spared for finding the missing people as soon as possible.

He said that a committee has been formed immediately to investigate this issue and the public safety commission was assigned to examine the surrounding buildings, adding that anyone responsible for the collapse will be held accountable.