A civilian killed, others injured due to shelling attacks in Damascus, its Countryside and Daraa 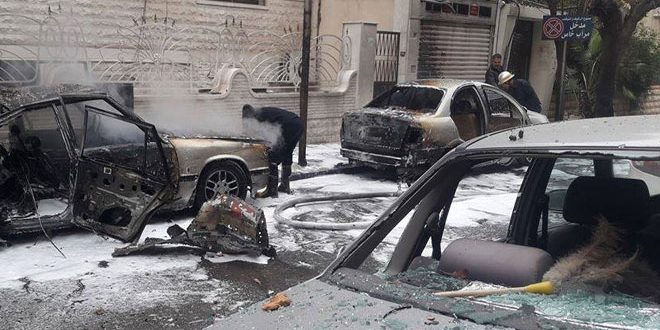 Damascus/Daraa, SANA – A civilian was killed and four others were injured on Sunday when the armed groups targeted neighborhoods in Damascus and its Countryside with shells, in a new breach of the de-escalation zone agreement.

A source at Damascus Countryside Police Command said that three mortar shells landed in al-Fern and al-Madares neighborhoods in Jaramana area, claiming the life of a civilian, injuring another and causing material damage.

SANA’s correspondent said that the Syrian Arab Army retaliated with precision strikes targeting the areas from which the shells were fired, destroying fortified positions and rocket launchers and inflicting losses upon the armed groups.

Material damage was caused on Sunday due to shelling attack on residential neighborhoods in Daraa city.

Armed groups positioned in some of Daraa al-Balad’s neighborhoods and al-Naziheen Camp fired four rocket shells on citizens’ houses in Shamal al-Khat neighborhood in the city, in addition to targeting the neighborhoods of al-Sahari, al-Kashef, and Daraa al-Mahata with more shells, causing massive material damage to properties.