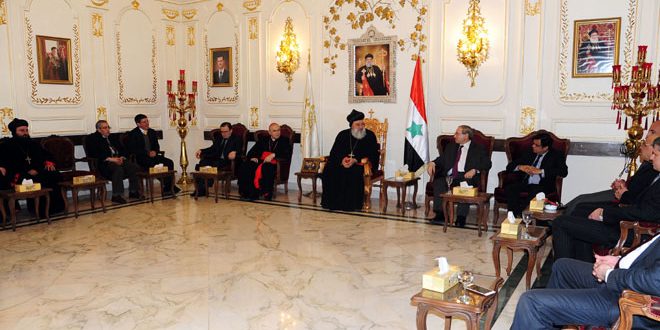 Damascus, SANA – Syriac Orthodox Patriarchate of Antioch and All East organized a reception for heads and representatives of the diplomatic missions in Damascus on occasion of the New Year at St. George Patriarchal Church.

In a speech during the reception, Patriarch Mar Ignatius Ephraim II of Antioch and All the East expressed hope that peace and security will return to Syria in the new year, denouncing at the same time the repeated aggression launched by terrorist organizations against innocent civilians.

Patriarch Ephraim II hailed the achievements and victories realized by the Syrian Arab army against terrorism in cooperation with the supporting and allied forces.

He called upon the governments which are involved in supporting terrorism to stop their support and work on restoring security and stability to Syria.

The Patriarch referred to the national coherence and the state of coexistence and tolerance binding the Syrians, which constitutes an example to follow by the whole world.

Participating in the reception, Deputy Foreign and Expatriates Minister Fayssal Mikdad said that Syria has started to recover and to return to normal life, as it is a country that believes in the principle of equality among all citizens and in its key historical role in the region.

Mikdad referred to the solid national unity binding all spectrums of the Syrian people, stressing that all schemes to undermine their resilience and unity have been foiled.

He talked about the victories achieved by the Syrian Arab Army and its steadfastness in face of the foreign-backed terrorist war, indicating that the terrorist organizations wouldn’t have been able to continue without the huge support provided to them by regional, Arab, and Western states.

Mikdad said that the regime of Recep Tayyip Erdogan has transformed Turkey into a corridor for terrorists, as it has allowed tens of thousands of terrorists to enter Syria backed by the US as they thought that they can change the role of Syria in the region, but their schemes have been foiled thanks to the steadfastness of the Syrian people and their leadership.

In turn, Ambassador of the Vatican in Damascus Cardinal Mario Zenari expressed hope that the Syrian people will be able to achieve victory over terrorism and that security and stability will return to Syria a soon as possible.