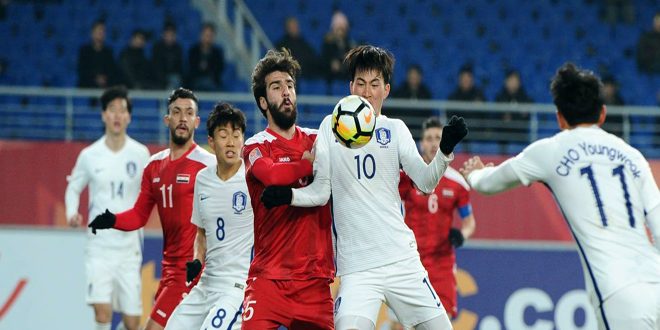 Beijing, SANA – The Syrian Olympic football team will play with its Vietnamese counterpart next Wednesday at 01:30pm in its third and final Group D match at the 2018 AFC U-23 Championship currently held in China.

With a goalless draw against South Korea, Syria picked up its first point of the tournament after losing its opening game against Australia while the result moves South Korea to the top of Group D standings with four points. Vietnam tied Australia in the group standings with three points.

“The match was very difficult. The Korean football players are impressive and strong. We saw Vietnam’s game against Korea and we tried to learn from it. We had some problems in the transition from defense to attack and if we didn’t have those problems, we could have produced a better performance and a better result,” said Hussein Afesh, coach of the Syrian Olympic football team.

For his part, Coach of the Korean football team, Kim Bong-gil said: “In the first half we were under a lot of pressure from our opponents. It was a tough match and in the second half, we had many good opportunities to score but we couldn’t finish so the result was a draw.”

Beijing football Syria 2018-01-16
ghossoun
Share
Previous Homs on 15,01,2018
Next Rain will fall in different areas across the country, temperatures to drop