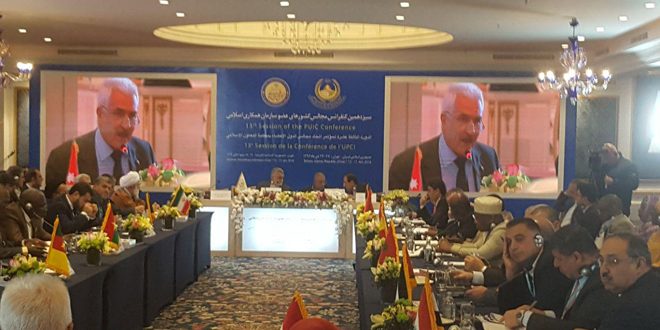 Tehran, SANA- Member of the Foreign Relations Committee at the People’s Assembly, Ali al-Sattouf, said that the racist terrorist occupation entity planted by colonial states at the heart of the Arab and Islamic world seeks to fragment the region, occupy more lands and to Judaize al-Quds (Jerusalem) and usurp it from the Palestinians.

Sattouf’s remarks came Saturday evening during the 8th meeting of the Standing Committee on Palestine, and the Consultative Meeting of the Arab Group within activities of the 13th Conference of the Organization of Islamic Cooperation (OIC) Member States.

“We in Syria believe that our conflict with the Zionist entity is a conflict of existence, therefore, we will continue the resistance along with our partners from the resistance axis till liberating Palestine and foiling all the schemes of the US and colonial hegemony in the region, “Sattouf said.

He clarified that the Zionist entity has violated all the international resolutions related to the Palestinian cause as a result of the support provided to it by the US and the states which back its policies.

Sattouf said that US President Donald Trump’s decision on recognizing al-Quds as capital of the Israeli occupation is a new Balfour Declaration, adding that liberating Palestine is a legitimate, ethical and humanitarian duty.