Cornerstones of many projects in Aleppo eastern countryside laid down 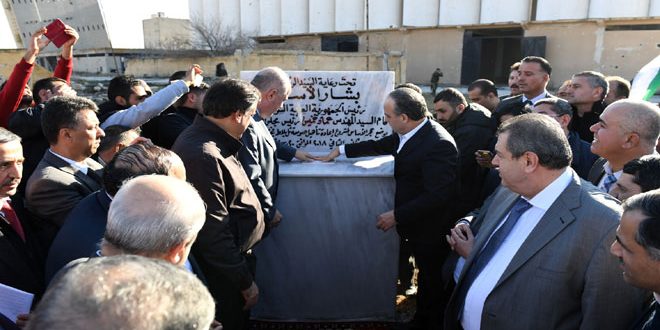 The production process at the General Company for Vegetable Oils Factory was launched again after it had been stopped for seven years with a production capacity of 65 tons of oil and 405 tons of cotton seeds.

Premier Khamis, during the third day of his visit to Aleppo accompanied by government delegation, asked the management of al-Furat Factory for manufacturing and producing tractors to identify the economic feasibility of the rehabilitation process.

He hailed the Syrian Arab army’s sacrifices in protecting and defending the homeland.

Means of promoting the touristic and investment situation in Aleppo were discussed also during the delegation meeting with owners of the touristic facilities in Aleppo.

Khamis said that the private sector in Syria is a main partner and supporter for the national economy.

He called for mobilizing all efforts for supporting reconstruction process and the comprehensive developmental building.

The Premier hailed the significant role of the economic activities in supporting the resilience of the Syrian people during the crisis, asserting that Aleppo will return as the main pillar of economy in Syria due to the efforts of its inhabitants.

Local Administration and Environment Minister, Hussein Makhlouf,  said that some SYP 200 million were allocated to implement a number of service projects in the towns of Nubbul and al-Zahraa in the countryside of Aleppo and on preparing a study of a developmental project whose revenue goes to Nubbul town council with a cost of SYP 350 million.

For his part, Health Minister said that the Ministry works on the establishment of comprehensive clinics, with all specializations and an emergency medical point to provide health services to inhabitants of the two towns.

The Minister pointed out that all medicines, including the children vaccinations, are available.

Khamis also met with a number of Islamic and Christian scholars in Aleppo.

He confirmed that the unity among the Syrians and their rallying around their wise leadership and brave army contributed to thwarting the conspiracy targeting the country.

He renewed that the national unity among the Syrian people strengthens and immunizes the homeland against all conspiracies and risks.

For their part, members of the Islamic and Christian scholars  said that the national awareness of Aleppo citizens was the main factor behind their steadfastness in the face of terrorists who are backed by Arab, western and regional states.

In the same context, Khamis congratulated Armenian Orthodox sect who follows the Julian calendar in Aleppo on Christmas.

Khamis said that Syria will ever remain an example to be followed in coexistence, amity and peace, hailing the key role of clergymen in spreading awareness in facing the western cultural invasion.