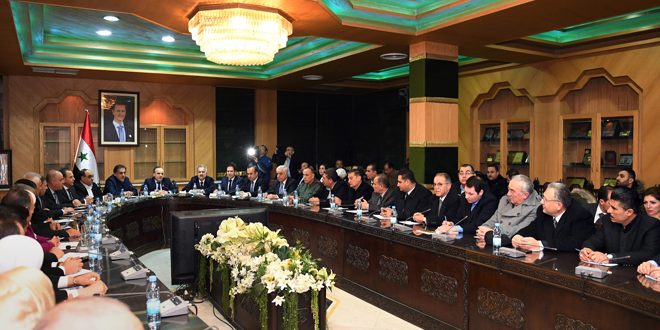 Aleppo, SANA – As part of the government delegation work visit to Aleppo, Prime Minister, Imad Khamis was briefed on the services and living situation in Aleppo Province and demands of residents there with the aim of securing their needs and improving the services provided to them .

During the delegation’s meeting with members of the People’s Assembly representing Aleppo Province, the parliamentarians spoke about the tangible improvement witnessed by the service and development sector in the province since the last year.

They also talked about the good implementation rates in projects of rehabilitation of public utilities and infrastructure of electricity, water, sewage and the restoration works in addition to the remarkable progress in the health and education sectors.

Premier Khamis said that cooperation between the two legislative and executive authorities are important to overcome the challenges and difficulties facing the province residents, stressing that the government began a new phase of building Aleppo.

He pointed out that the government’s plan today is based on re-developing the sector of services to upgrade it to a level that attains the inputs of economic, investment, social, demographic and touristic development to all Aleppo sons.

According to Khamis , SYP 60 billion were allocated for completing the implementation of  services and development projects in the province.

In the same context, the Premier said that Bustan al-Qaser power substation in Aleppo returned into service with a capacity of 66/20 kV after completing the works of rehabilitating it at a cost of SYP 3 billion.

On Friday, and upon the directives of President Bashar al-Assad, a government delegation headed by Prime Minister, Imad Khamis, started a work visit to Aleppo to inspect the economic and services situation in the province. The delegation comprises 16 ministers