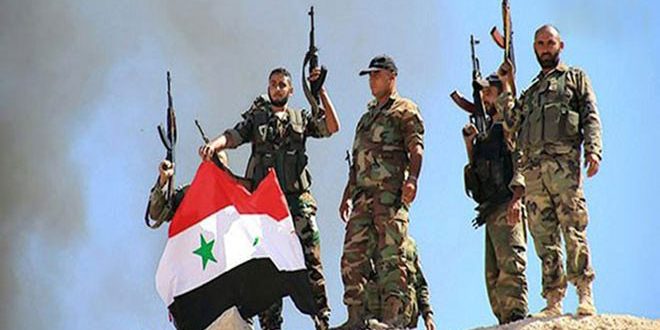 Hama, Deir Ezzor, SANA_ Units of the Syrian Arab Army, in cooperation with the backup forces, on Friday regained full control over the village of Abu Dali in Hama north-eastern  countryside.

A military source told SANA that army units, in cooperation with the backup forces, continued their operations against Jabhat al-Nusra terrorists’ and gatherings in the north-eastern countryside of Hama Province and regained control over Abu Dali village after eliminating large numbers of terrorists and destroying their weapons.”

The source pointed out that the engineering units are combing the village to dismantle the mines and explosives planted by terrorists to impede the advance of the army units and to cause big damage to the citizens’ properties and homes.

The army units found large amounts of weapons, munitions, shoulder-mounted rocket launchers, some of which are US-made, communication devices, and broadcast stations during combing a number of neighborhoods in Deir Ezzor and eastern countryside.

SANA’s reporter said that army units continued operation of combing the streets, residential buildings, gardens and areas in Deir Ezzor, which the Syrian Arab Army has regained control over, to dismantle the mines and explosives in preparation for the return of the people to their homes.

In the eastern countryside, a unit of the army seized  wireless communication devices and broadcast stations in one of Daesh (ISIS) sites during combing al-Sayal village in Bukamal countryside.