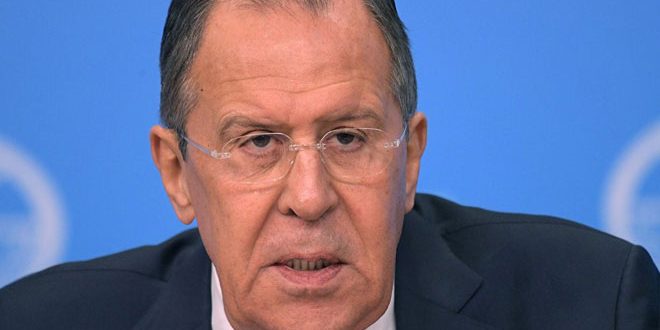 Moscow, SANA-Russian Foreign Minister Sergey Lavrov said that the United Nations Educational, Scientific and Cultural Organization (UNESCO) comes under external pressure that hampers the revitalization of its work in the field of restoration of monuments in Palmyra and Aleppo.

“Due to the serious damage which terrorists inflicted to the Middle East’s richest cultural and historic heritage, we are trying to reactivate the work of UNESCO in order to restore the monuments in Palmyra and Aleppo. Unfortunately, the initial positive signals have now been slowed down due to ongoing pressure on the UNESCO secretariat, which only demonstrates the grievous fact that political rationale still trumps common sense,” Lavrov said during a session of the Russia’s Commission for UNESCO in Moscow on Wednesday.

Syria has been subjected to acts of sabotage, destruction, looting and systematic smuggling by armed terrorist organizations, especially in Palmyra and in the eastern and southern regions where UNESCO has repeatedly expressed condemnation of these acts and considered combating the smuggling of Syrian antiquities as its most important priority.

Later, Lavrov and UN Secretary General Antonio Guterres have discussed in a phone call preparations for Astana meeting, Geneva talks on Syria and prospects of holding the Syrian National Dialogue Conference in Sochi.

Russian Foreign Ministry stated that the two sides discussed issues related to settlement of crisis in Syria in light of the latest outcomes of Geneva meeting, preparations for Astana meeting and Geneva talks and the implementation of Russian initiative to hold Syrian National Dialogue Conference in Sochi to support the implementation of UN Security Council No. 2254.