Mikdad: Syria fully implemented requirements in light of its accession to the OPCW 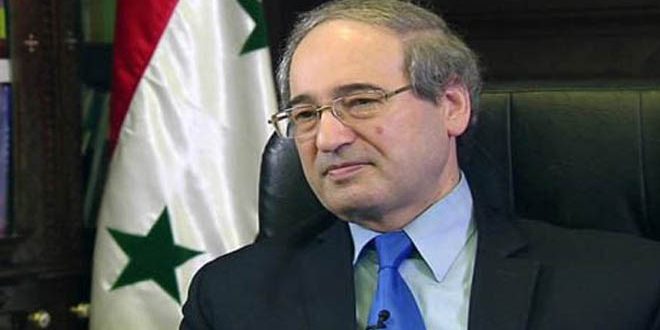 The Hague, SANA-Deputy Foreign and Expatriates Minister Fayssal Mikdad affirmed that Syria has fully implemented all the requirements in light of its accession to the Organization for the Prohibition of Chemical Weapon (OPCW), stressing that Syria condemns, with the strongest terms, the use of chemical weapons and considers it an immoral act.

“Syria has fully adhered to all the requirements in light of joining the OPCW, but the success achieved through getting rid of the Syrian chemical weapons did not satisfy some countries or entities that wanted to invest this issue to destabilize security and stability in Syria and weaken the government and undermine its capabilities,” Mikdad, Chairman of the National Committee on implementing Syria commitments according to Chemical Weapons convention said at the 22nd Session of the Conference of the States Parties for the OPCW which kicked off on Monday in Hague.

Therefore, they sent their agents and mercenaries from all parts of the world to Syria to carry out terrorist acts, including the use of chemical weapons and toxic chemicals against civilians and against the Syrian Arab Army as they fabricated scenarios and provided false witnesses to build false accusations to defame the image of Syria.

Mikdad reiterated that Syria condemns, in the strongest terms, the use of chemical weapons by whomever and anywhere under any circumstances and it considers such act as immoral and a clear breach of the international laws and conventions.

He noted to the unprofessionalism of the OPCW-UN Joint Investigative Mechanism formed by the UN Security Council despite support and Syria’s full cooperation, adding that the Mechanism has mainly depended on information provided by the fact-finding mission and other parties which have suspected relations with terrorist organizations with total ignorance of international standards, rules and agreements.

This has led to wrong conclusions and politicized accusations by states which have already set up the path of this committee since the very beginning with the aim of distorting the image of the Syrian state and exercise more political pressure on it to achieve their goals, Mikdad added.

He said that the creative chaos policies and using force to change regimes contributed to expanding terrorism across the world and provided terrorists an easy access to toxic chemical materials in the region, indicating that such behavior raises serious concerns and challenges to confront chemical terrorism and the use of toxic chemical materials by Daesh, Jabhat al-Nusra and other terrorist organizations in different areas in Syria and Iraq.

He noted that gaining international recognition of this agreement is very important to achieve its objectives in establishing an effective international system against chemical weapons which will contribute to enhancing international peace and security, particularly in the Middle East region.

Mikdad urged the Technical Secretariat and UN member states concerned to double international efforts and work harder to create a WMD-free zone in the Middle East, a thing that will not be achievable without obliging the Israeli entity to join the international conventions on prohibition of weapons of mass destruction since it is the only party which does not join any of them till now and has huge arsenal of weapons of mass destruction threatening the security of the Middle East region and the lives of its peoples.

He noted that Syria, in 2003, has submitted a draft resolution on Mideast free of weapons of mass destruction but the US hindered the adoption of such initiative to avoid any pressures on Israel.

Mikdad reaffirmed Syria’s keenness on cooperation with the UN Technical Secretariat and its positivism and transparency in dealing with it in order to implement obligations provided in the agreement and relevant UN Security Council resolutions.

He noted that the Syrian government has recently extended an invitation to the Director General of the Organization for the Prohibition of Chemical Weapons to visit Syria and discuss means to further strengthen cooperation between the two sides, expressing hope that it would be in the near future.