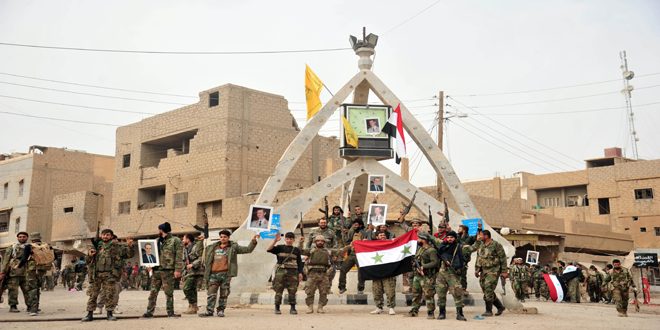 Deir Ezzor, SANA – Dust has settled in the strategic eastern city of al-Boukamal, located on the Syrian-Iraqi border, after the Syrian Arab Army and the allied forces eliminated the last hotbeds of Deash (ISIS) terrorist organization there.

The retake of al-Boukamal, which was meant to be a springboard for the Israeli-U.S. project of imposing hegemony on the region, has been foiled, with Daesh’s grand dream of establishing an “Islamic Caliphate” being quashed.

Speaking about the course of the military operations carried out in al-Boukamal, located 140 km southeast of Deir Ezzor city, a field commander told SANA’s delegate that the army units and allied forces succeeded in isolating Daesh from the direction of Iraq and in the Syrian al-Badia from the direction of the railway by establishing control over the villages of al-Herra and al-Swei’iyeh from the southern part and al-Sukarriyeh town until the Euphrates River’s bank.

All supply routes to Daesh were totally cut off from the northern part after regaining al-Ashaer town, the commander said.
He said Deash terrorists made desperate efforts and used car bombs, explosive devices and suicide bombers in their attempt to defend their fortifications set up among the citizens’ houses, noting that the army personnel fought tough house-to-house battles and tunnel confrontations.

“We were able to rout them and force the remaining terrorists out from al-Boukamal, and now the engineering units are combing the city’s neighborhoods to remove mines and explosive devices,” the commander added.

Towards the end of the army’s operation in al-Boukamal, tens of Deash terrorists who felt the noose was tightened on them fled the city under the protection of the US-led coalition, whose forces tended to jam satellite communications to prevent the Syrian and Russian air forces from targeting Daesh supply convoys.