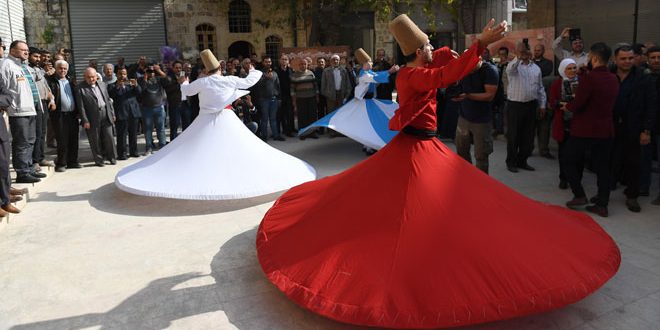 Aleppo, SANA – A project to revive the old markets of Aleppo was opened on Thursday, including the rehabilitation and activation of al-Jumruk Souq and Khan that involves 116 shops in the Old City of Aleppo.

The project was implemented by the Aleppo Chamber of Commerce in cooperation with the owners of shops and businesses.

During a tour in the area, Internal Trade and Consumer Protection Minister Abdullah al-Gharbi and Aleppo Governor Hussein Diab were briefed on the rehabilitation and maintenance operations and the revitalization of the market that was affected by terrorism.

Al-Gharbi affirmed the government’s keenness and support for all activities that would help restore, revitalize and re-operate old markets in all provinces and preserve archaeological and historical landmarks, affirming that organizing specialized exhibitions and symposia and promotional seminars for Syrian companies and products is a part of the government’s plans and programs to activate the industrial and commercial production and the exportation of Syrian products to foreign markets.

A festival of 80 pavilions and more than 150 participants was also opened at the Market, showcasing traditional products, clothing, food, sweets, cosmetics, perfumes, silverware and detergents.