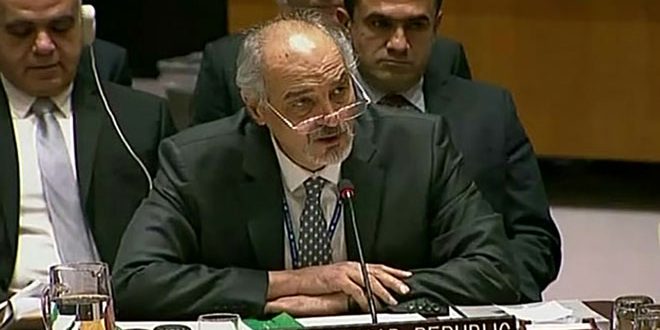 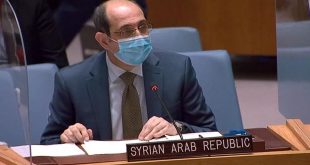 New York, SANA – Syria’s Permanent Representative to the UN Bashar al-Jaafari voiced Syria’s rejection of the report of the OPCW-UN Joint Investigative Mechanism on Khan Sheikhoun incident because it is not neutral and not professional, and it built its false charges against Syria on the process of fabricating evidence and manipulating information.

In a session of the Security Council on the report of the OPCW-UN Joint Mechanism on Tuesday, al-Jaafari wondered how the Mechanism didn’t consider Khan Sheikhoun incident as a political issue, saying “Since when is chemical terrorism considered a fully technical issue and not a political one?”

He clarified that some states’ governments claim that they adhere to ethics and they consider themselves as custodians of the provisions of international law and the UN Charter while at the same time they adopt policies that violate these noble moral principles and they exploit them to implement their destructive interference agendas.

“Some UN committees, such as the Joint Mechanism, which should be neutral, professional, and credible, have proven through their work that they are biased and politicized,” al-Jaafari elaborated.

He cited a number of examples on the lack of neutrality and professionalism by the Joint Mechanism, saying that the mechanism said in its report that Syria didn’t hand it a report on the internal investigations on the incident of Khan Sheikhoun, while the truth is completely different.

“On August 16th, I handed the head of the mission a copy of the report made by the Syrian National Investigation Committee on Khan Sheikhoun incident and I told him that he is the only UN official who has a copy of this report,” he explained.

Al-Jaafari added that the report also mentioned that the Syrian Arab Army achieved decisive victories a day before the chemical incident and it advanced to reach the outskirts of Khan Sheikhoun, so why would it commit that crime with its well-known repercussions while the only beneficiary of that attack is Jabhat al-Nusra terrorists and the governments which level accusations at the Syrian Government?

He wondered why the fact-finding mission and the Joint Mechanism refused to visit Khan Sheikhoun, why they conducted a remote investigation while the UN Department of Safety and Security confirmed the possibility of visiting Khan Sheikhoun, and why didn’t the Joint Mechanism collect evidence from al- Shuairat Airbase which the US administration claimed to be the site from which the chemical attack was launched.

Al-Jaafari pointed out that technically speaking, Su-22 aircrafts can’t conduct a strike against Khan Sheikhoun according to the trajectory that the Mechanism talked about in its report, and the expert consulted by the Mechanism used a misleading and indecisive term as he said “it is possible to conduct such a strike,” but the Mechanism simply adopted this opinion without questioning it.

Al-Jaafari said that the Mechanism didn’t exclude the possibility that the hole at the site of the incident was caused by the explosion of a handmade explosive device, yet the same time it says that it is confident that the hole was the result of an airborne shell.

He added the report claimed that the allegedly collected samples from the site of the attack showing that the chemical substance used in the attack can be only made by the Syrian government under the claim that it was made from materials from the original stockpile of Syria, trying to mislead those who read the report into thinking as if these samples are like DNA print, while in reality any specialized laboratory in the West can make such a sample.

Al-Jaafari also said that the lack of remains of any shell tail fins at the scene of the incident, as the report states, indicates that there’s misdirection regarding the claims of a shell being dropped there from the air, stressing that the lack of a chain of custody for the evidence that was found makes it worthless.

Syria’s Representative criticized the contradictions in the report regarding the existence or non-existence of sarin in the samples analyzed by the Joint Mechanism, accusing the Mechanism of making no effort to explain such contradictions.

Al-Jaafari attributed the contradictions in the report to a scenario of manipulation of evidence and information with the aim of accusing the Syrian government, similar to what happened when the US Administration exploited misleading conclusions to attack al-Shuairat Airbase.

He reiterated Syria’s commitment to the Chemical Weapons Convention (CWC) and that Syria no longer possess any banned toxic chemical weapons as per the CWC since Syria joined it in 2013, which was confirmed by Special Coordinator for the OPCW Joint Mission Sigrid Kaag in her report in June 2014.

“My country considers the use of chemical weapon as an immoral and deplorable act at any place, any time, and under any circumstances,” al-Jaafari said.

He said that this report and its fabricated results exposes the states that support terrorism, as the scale of manipulation of facts and evidence in it is unprecedented, and brings to mind the false allegations made by former US State Secretary Colin Powell to justify the US attack on Iraq, which were later echoed by John Kerry in 2013 to justify attacking Syria.

Al-Jaafari wondered how long the Syrians will continue to suffer due to the terrorism that is supported by Western states that believe they can kill, destroy, cheat, and lie without being held accountable, adding that the terrorist war on Syria has so far cost the governments sponsoring it USD 137 billion, as per the confessions of one of those who participated in it, former Qatari Prime Minister Hamad bin Jassem, who told the media only a few days ago that this war on Syria was a joint plot with the Saudis, Turks, Americans, Israelis, and Jordanians, with Syria and its people becoming a victim over which hyenas fight.

“Syria rejects in form and substance all that was stated in the report of the Investigative Mechanism in terms of its allegations regarding Khan Sheikhoun incident,” he said, adding that Syria also refuses to become a victim of the states sponsoring terrorism, asserting that Syrians will continue to fight terrorism and will rebuilding their country in order to achieve the aspirations of its citizens, with the help of Syria’s true friends.

During the same session, Russia’s Deputy Permanent Representative to the UN Vladimir Safronkov stressed that the report contains several contradictions, flaws, and gaps, and that it relied on insufficient evidence to reach a decision on what happened, in addition to it depending on information given by “opposition” groups that are linked with terrorists, including the White Helmets.

Safronkov added that the Mechanism refused to consider the theory of the Khan Sheikhoun incident having been fabricated to accuse the Syrian government of using chemical weapons, and that the investigation team never visited Khan Sheikhoun and the samples discussed in the report weren’t procured from the site of the incident but rather from other countries, which is unacceptable.