Army cuts off terrorists’ supply lines between Jordan and Quneitra 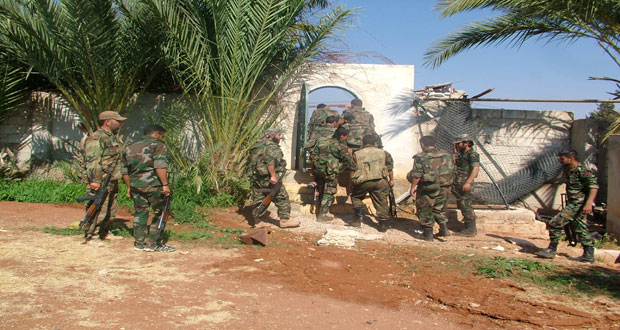 Daraa, SANA – The army is continuing operations against terrorists in the western countryside of Daraa province, especially between Daraa and al-Yadouda, where the army units gained control of the supply line used by terrorists coming from Jordan to Quneitra.

The new advance made the army 1,300 meters away from the areas of al-Yadouda, al-Mizireeb and Kharab al-Shahm.

A field commander told SANA that the army made new defense lines in the area with the aim of protecting the locals in al-Yarmouk and al-Basel suburbs, whose population is over 50,000.

He said that the terrorists’ repeated failures to enter Daraa city caused them to focus on these suburbs, but the army continues to repel any attempt by terrorists to enter the city or attack its people.

The officer said that terrorists made no less than 17 attempts to attack the area from the direction of al-Yadouda, all of which were foiled, and that dozens of infiltration attempts made from the Jordanian territories were also thwarted, adding that the army has full control over the areas of Wadi al-Zaidi and Talat al-Thaela, putting Talat al-Bajbouj area under the army’s firing range.

He noted that prior to establishing the new defense lines, the terrorists had been attacking the aforementioned suburbs from al-Yadouda, Wadi al-Zaidi, and Tafas, and now they can no longer do that.

The officer said that the army is working to cut off other supply lines used by terrorists to move between Syria and Jordan.