Sit-in to express solidarity with Turkish prisoners on hunger strike 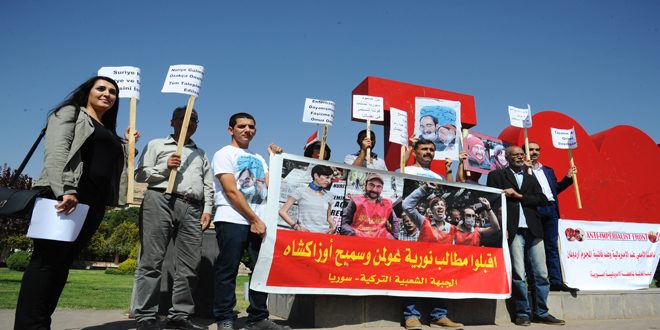 Damascus, SANA – A sit-in was held in al-Umawyeen Square in Damascus on Thursday to express solidarity with the two detainees who are on hunger strike in the Turkish regime’s prisons.

The event, organized by the Turkish People’s Front and the Anti-Imperialism International Front in Syria, aimed at expressing solidarity with the Turkish activists Nuria Gulman and Samih Ozashah who have been on hunger strike in Turkish jails for 225 days ago. The Turkish Front said in a statement that this sit-in, which comes one day before the trial of Nuria and Samih, is meant to show support to them and make their voice heard, as the issue does not concern them alone, but it concerns 150,000 workers who were dismissed from their jobs, adding that it is the case of the whole Turkish people and other people striving for freedom, justice and dignity. denunciation and rejection of the entry of Turkish forces into the Syrian territory in the city of Idleb recently.

For his part, Chairman of the Syrian Journalists Union Moussa Abdul-Nour said that such events expose the policy of Erdogan and what he is doing against liberties and anyone who disagrees with him, considering that the issue of Samih and Nuria is an example of this policy followed by the Turkish regime. who disagree with or criticizes its actions and decisions.

This policy has reached the point of dismissing hundreds of thousands of Turkish gendarmes and officials from their jobs and closing newspapers that dared to criticize the ruling Justice and Development Party (AKP)’s policy, in addition to arresting journalists.