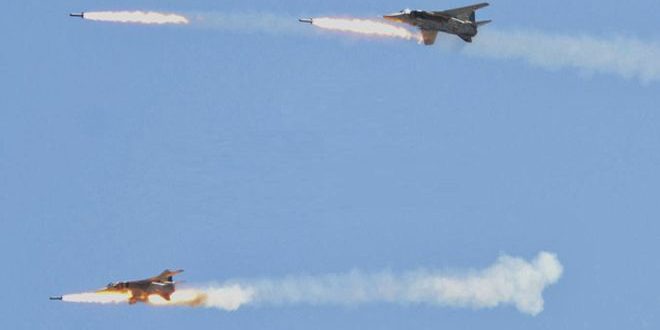 Provinces, SANA- Army units thwarted on Wednesday an ISIS attack on a military post in the southwestern countryside of Deir Ezzor, in parallel with continued airstrikes in al-Mayadin in the
southeastern part of the province.

The army members clashed with the ISIS terrorists who attacked the military post, located in in Kabajib town, killing scores of them and destroying their weapons and munitions, a military source told SANA.

Meanwhile, the Syrian Air Force launched intensive strikes against fortified positions, centers and movements of ISIS terrorists in the villages of Buqrus al-Fouqani, Jadid Ekeidat, al-Bouleil, and al-Mayadin city in the eastern and southeastern countryside of the province.

The source affirmed that a large number of the terrorists were killed and several of their armored vehicles, cars equipped with machineguns, and artillery positions were destroyed in the airstrikes.

A number of ISIS terrorists were killed or injured and three vehicles rigged with a large amount of explosive materials and other vehicles equipped with heavy machineguns were destroyed in the course of the army’s advance, according to the reporter.

The Syrian Air Force carried out intensive sorties against ISIS gatherings, positions, and vehicle convoys in the eastern countryside of Salamiyeh in Hama province.

A military source told SANA Wednesday that the Syrian Air Force destroyed scores of ISIS vehicles, some equipped with machineguns, and killed a number of ISIS terrorists in intensive airstrikes against their gatherings and positions in the villages of Jib Aeid and al-Maksar al-Janoubi and its surroundings and in the eastern countryside of Salamiyeh.