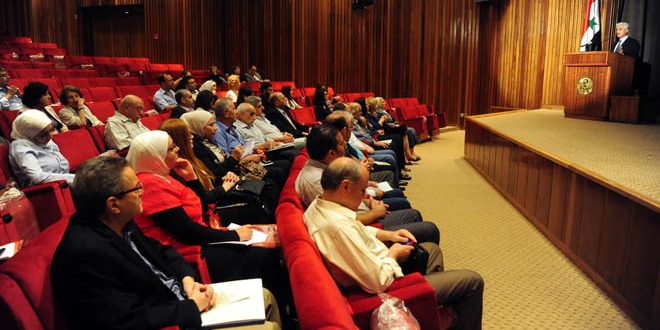 Speaking during the event, Head of the Syrian Book General Commission, Thaer Zein Eddin stressed the role of translation and translators in building bridges between cultures and people and different periods of time in order to move forward towards prosperous future.

For his part, Chairman of the Syrian Publishers Association, Haytham al-Hafez, stressed the importance of paying more attention to translating the cultures of eastern civilizations such as the Chinese, Indian, Persian and Korean which will enrich world literature as a whole.

Head of Translation Department at the Syrian Book General Commission, Hussam Khaddour highlighted the interconnections between cultural diversity and linguistic diversity, stressing the key role of translation in preserving this culture and enhancing the mankind’s knowledge.

The participants called for setting up a legal framework for translation profession that maintains translators’ rights, reconsidering educational mechanisms at Syrian universities, improving curricula in  order to build a well-qualified generation of translators.

On the sidelines of the Symposium, a book fair was held showcasing different translated books in various fields such as politics, economy, world literature and novels and short stories.