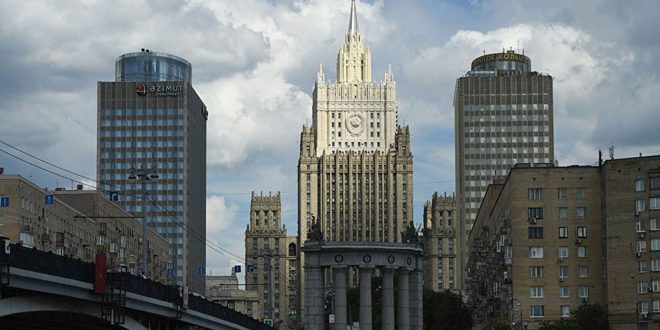 Moscow, SANA- Russian Deputy Foreign Minister Oleg Syromolotov said that the Washington’s strategy to fight ISIS had proven to be fully inefficient and that targeting of both civilians and civilian institutions in Syria by the US aircrafts has caused humanitarian disasters.

Speaking to Sputnik news agency on Friday, Syromolotov said that numerous “chronic” mistakes of the US planes, such as strikes against civilian objects, and the lack of humanitarian aid led to a humanitarian catastrophe in Syria’s Raqqa and other Syrian cities.

He pointed out that the Russian side has been deflecting and will deflect the US attempts to hamper the eradication of the terrorist hotbed in Syria.

“In this context, we will continue to emphasize extremely clear that we have harshly deflected and will continue to deflect the US attempts to hinder the quick and final elimination of the terrorist hotbed in Syria, slow down the offensive of the Syrian government troops,” he added.

The Russian diplomat noted that Moscow is certain that the United States does not want the Syrian army, supported by the Russian Aerospace Forces, to win over terrorist organizations, including ISIS, who still receive external funding and technical support despite the UN measures to combat financing terrorism.

He added that without a doubt, the most urgent task nowadays for the international community is the elimination of terrorism, represented by ISIS and the other organizations listed on the international terrorism regulations, including Jabhat al-Nusra.

Syromolotov noted to the US aggression on one of the military posts on al-Tharda Mountain in Deir Ezzor in September 2016, saying that the warplanes led by Washington have flown for hours over Syrian army positions, ensuring the success of terrorists’ moving.

He added that dialogue between Moscow and Washington on the coordination of military operations against ISIS terrorist organization on the Syrian territory will continue, affirming the Russian Aerospace Forces will continue to support the Syrian army in the fight against terrorism.

He expressed Moscow’s readiness to continue working with the American side to reach to a settlement for the crisis in Syria. But he pointed out that reaching a political solution requires the sincerity of American intentions and the fight against terrorism seriously.

He said that the humanitarian situation in Syria has gradually improved thanks to the establishment of de-escalation zones.