After ten days of breaking the siege, Deir Ezzor city is recovering its vitality 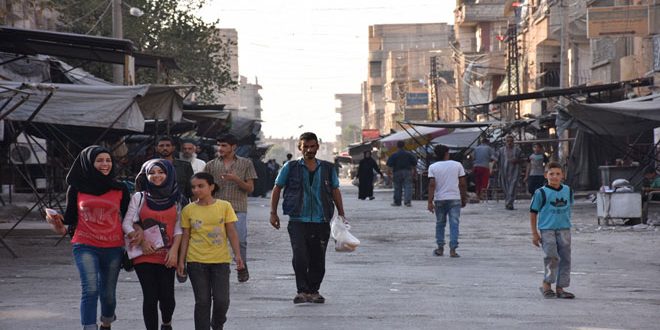 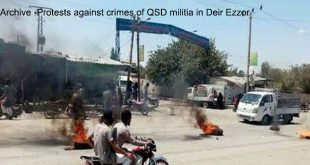 Deir Ezzor, SANA – After the success of the Syrian Arab Army on September 5th in breaking the siege imposed by ISIS on Deir Ezzor city, positive changes have started to become apparent in the various aspects of locals’ lives.

Now, a tour in the streets and neighborhoods of Deir Ezzor city after it was freed from the chains of ISIS draws a clear picture of the locals’ daily lives as they are gradually shaking off the dust of suffering that lasted for more than three years.

Harabesh neighborhood, which overlooks Deir Ezzor Military Airport, stands witness to the vicious battles that took place and the hardships caused by the siege, yet its occupants are starting to reclaim their lives.

Abu Mohammad, a grocer, said “three long and hard years have passed. We spent them like slaves. Hunger killed some of us, both young and old, and it almost killed us but then the Syrian Arab Army’s vanguards arrived and brought us salvation and victory. ISIS terrorists used to target homes, shops, and even fields, preventing food from reaching the neighborhood and seizing all of it, leaving the locals to fall prey to hunger and disease.”

He said that prior to breaking the siege, they would wait for food airdropped via parachutes, but after the Syrian Army entered, dozens of trucks carrying food and medical supplies arrived, and locals began to come out of their homes and resuming their daily lives in a way that is almost normal.

Murrei, who was a teacher before the ISIS siege began, said that he wants all his students and the children of the neighborhood and the city to return to school, saying that the situation is much better and it’s possible for him to resume work in a few days.

In the middle of the neighborhood’s main street, a number of locals gathered at what remains of a pharmacy. Umm Abdelrazeq, one of the locals, said that this pharmacy was abandoned years ago, but after the government sent relief convoys following the end of the siege, medicine is now available again.

In al-Qusour neighborhood in the western part of the city, signs of normal life have returned, despite some wariness of ISIS’ treachery as the terrorists still target the area with shells.

Abu Fahd, who was standing near one of the local bread bakeries, said that he almost can’t believe that he can now buy bread normally, as terrorists used to attack locals as they gathered to buy bread, in addition to cutting off roads leading to the city.

During the tour of the city, scores of journalists from across the world were also wandering the alleys; something now made possible thanks to the Syrian Army’s epic battles against ISIS.