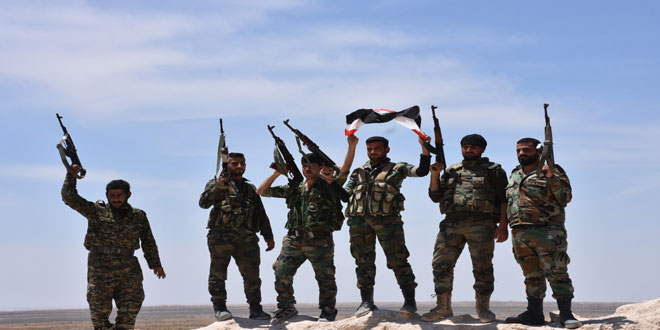 Provinces, SANA – Army units achieved a new advance in their military operations against gatherings of ISIS terrorists in the eastern countryside of Homs.

A military source told SANA that the army units continued their successful military operations in the eastern countryside of Homs, establishing control over an area in a front that is 12 km long and 4 km deep north of Mannnoukh village on the outskirts of Jebb al-Jarrah area, inflicting heavy losses upon ISIS terrorists in personnel and equipment.

Syrian and Russian air forces carried out on Friday intensive sorties against sites for ISIS terrorist organization in Deir Ezzor, inflicting heavy losses upon them in personnel and arms.

The military source said that Syrian and Russian air forces launched airstrikes on gatherings and fortifications of ISIS terrorists, destroying munitions, positions and vehicles for them in al-Thurdeh valley, the surroundings of al-Panorama area, the graveyards and al-Rishdiyeh neighborhood in Deir Ezzor city and al-Bugheilieh and Ayyash villages in the western countryside.

The source added that Army units, backed by fire support helicopters, continue their operations deep into al-Badia, establishing control over new areas and arriving at the administrative border of Deir Ezzor province from the direction of al-Sukhneh city,about 70 km east of Homs city.

A military source told SANA that many of the terrorists were killed and several vehicle equipped with machineguns were destroyed during the military operations, adding that engineering units combed the area to dismantle the explosives and mines planted by terrorists in an attempt to hinder the advance of the army towards the axes they escape to in al-Uqeirbat area. 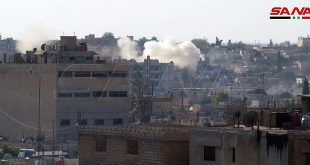 Raqqa, SANA- The Turkish occupation forces and their mercenaries of terrorists launched an attack with …