Nasrallah: the battle of Syrian-Lebanese borders has achieved its full objectives 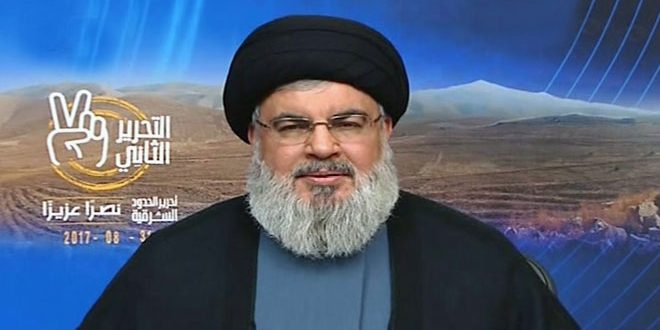 Beirut, SANA-Hezbollah Secretary General Hassan Nasrallah said on Thursday that the battle of the Syrian-Lebanese borders has achieved its full objectives with liberating all territories on the two sides of borders and expelled all terrorist organizations there.

Nasrallah was speaking on the occasion of the second liberation celebration. He thanked the Syrian leadership, represented by President Bashar al-Assad and the Syrian Army and people for their contribution to achieving the victory.

He added that the terrorists have posed a real threat to Syria and Lebanon, so, we, along the Syrian army, have confronted terrorists and offered the martyrs and the wounded.