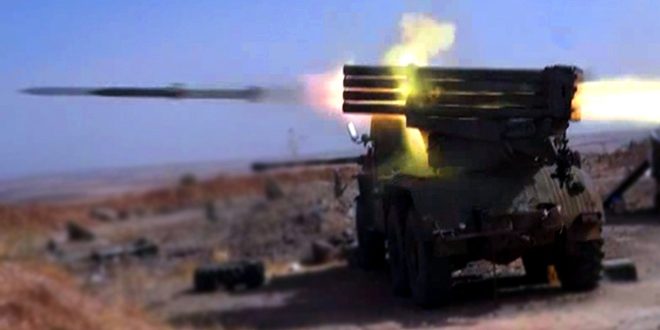 Provinces, SANA- Syrian Arab Army units, backed by the Syrian Air Force, on Monday continued to target ISIS fortifications in Deir Ezzor City and its countryside, destroying a workshop for manufacturing vehicles rigged with explosives in a time when new groups of the ISIS terrorists fled away from the eastern countryside.

SANA’s reporter in Deir Ezzor said an army unit destroyed a workshop for manufacturing explosive devices, car bombs and shells near al-Tamwin roundabout in Deir Ezzor city, killing terrorist Abu Abdullah al-Tunisi and 12 other terrorists who work at the workshop.

The reporter added that the Syrian Air Force carried out airstrikes targeting ISIS fortifications and infiltration axes, destroying their vehicles, fortifications and centers in the Panorama farms and in the neighborhoods of al-Ommal, the old Airport and Khasarat and the village of Ma’adan and Atiq in the southern countryside of the city.

An army unit carried out a successful raid on Taliet al-Qraya in the area surrounding the Airport, during which it managed to eliminate a number of ISIS terrorists, destroy their fortifications and seize all the weapons left by the terrorists fleeing from the place.

Local sources told SANA reporter that 7 terrorists were killed, and others were injured in clashes between armed groups in al-Salhiyeh town in Abu Kamal area in the eastern countryside of the province.

The sources added that the bodies of two terrorists of foreign nationalities were found near the old garage in al-Mayadin.

Meanwhile, units of army established control over the strategic mountain of Jabal al-Dahik to the east of al-Sukhnah in Palmyra countryside.