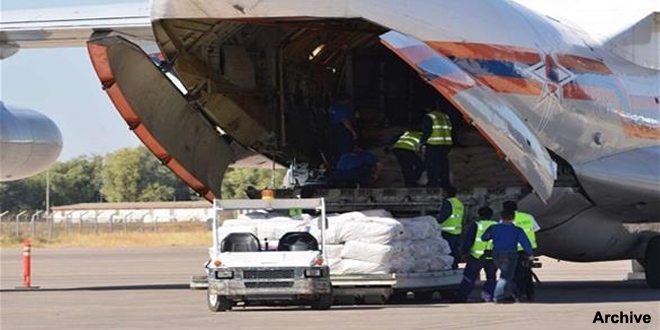 Hasaka, SANA – A Russian plane loaded with humanitarian aid arrived at Qamishli airport in Hasaka province on Monday, containing 3.5 tons of flour, 2.5 tons of rice and half a ton of sugar, and 146 packages containing stationery provided by the Russian government and people to the Syrian people.

“The continuation of the Russian assistance is one of the forms of support that the Russian government and people have offered to the Syrian people to confirm the depth of the relations between the two countries,” Hasaka Governor Jayez al-Moussa told reporters
at Qamishli airport.

He noted that the Association of Charity and Social Services in Qamishli was assigned to distribute the aid to needy and poor families according to specific criteria.