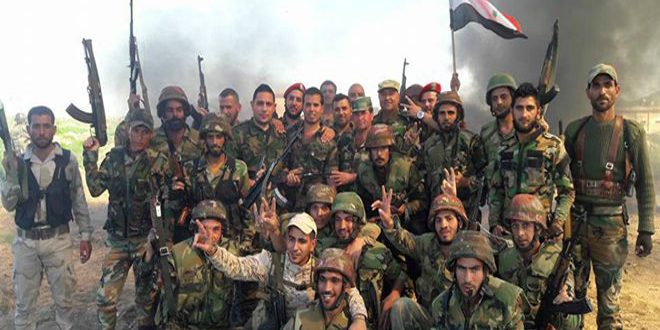 A military source told SANA that army units launched intensive operations against ISIS positions to the north of al-Sukhneh city on the international road towards Deir Ezzor, destroying the last gatherings of ISIS terrorists at a number of strategic points.

The source added that the army units have consolidated positions in the liberated points after combing them fully and dismantling the IEDs and mines left behind by the terrorists, paving the way for the implementation of new operations towards the east and advancing further towards Deir Ezzor.

The source noted that the army units operating on the axis of Jebb al-Jarrah established control over a number of important positions to the west of Mannoukh village, 85 km east of Homs city after killing a number of ISIS terrorists.

The Russian air force destroyed a convoy of vehicles for ISIS terrorist organization in the surroundings of Ekerbat town in eastern countryside of Salamiyeh in Hama.

A military source told SANA that the Russian air force carried out raids against ISIS gatherings and movements southeast of Ekerbat town in eastern countryside of Salamiyeh, destroying several positions and vehicles for the takfiri organization.

Syrian and Russian air force destroyed a command center and caches and munitions for ISIS terrorists in a number of areas in Deir Ezzor and countryside.

Earlier, the Syrian Arab Army units destroyed a cache of ammunition and a number of dens belonging to the ISIS terrorists in Deir Ezzor city and its countryside at a time when new ISIS-affiliated terrorist groups fled away from the fighting fronts.

SANA’s reporter in Deir Ezzor said that the army land units engaged in clashes with different types of heavy and light weapons with ISIS-affiliated terrorist groups in the neighborhoods of al-Howeiqa and al-Rashdiyeh and in the surroundings of the Airport.

The reporter added that a number of the ISIS terrorists were killed in the clashes and others were injured and their arms and ammunition were destroyed.

The Syrian Air Force carried out a number of airstrikes targeting ISIS positions in the surroundings of al-Panorama at the southwestern outskirts of Deir Ezzor city, destroying weapons’ depot and one of the ISIS main command centers. 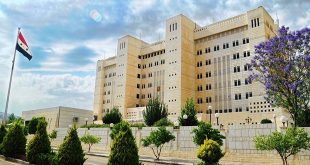