Mikdad: Syria will not give up any inch of its land 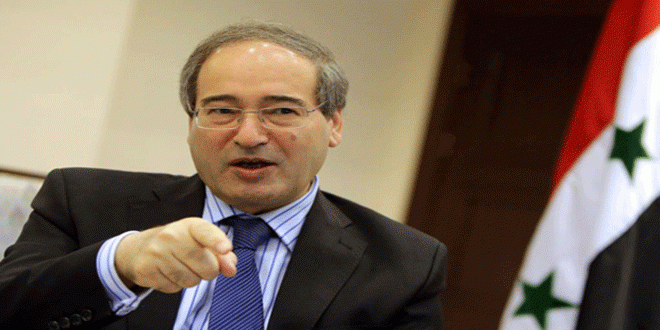 Damascus, SANA – Deputy Foreign and Expatriates Minister Fayssal Mikdad stressed that the government of the Syrian Arab Republic will not sacrifice even a hair’s breadth of what is related to Syria’s territorial integrity and will not give up any inch of the 185,000 km of its land.

Interviewed by the BBC and Reuters, Mikdad said that the victory which will be achieved today, tomorrow, or the day after in al-Sikhnieh will open the door for continuing to advance towards the besieged Deir Ezzor which is deprived of any food, water, or medicine without any cry from those who call themselves “international community.”

“We will advance towards Deir Ezzor and other areas that will be defined by the leaderships, but with regard to the north of Syria, we don’t want havoc and destruction, yet there is a miserable situation now in the northern areas in Raqqa and to the north of it,” Mikdad added.

He clarified that the so-called “international coalition” proved by shelling the forces of the Syrian Arab Army, whether in al-Tanf or in al-Tharda Mountain, or through downing the Syrian airplane, that it supports the terrorist forces, adding “whoever wants to fight terrorism wouldn’t attack the army fighting terrorism which is the Syrian Arab Army and its allies.”

With regard to supplying the terrorist groups in Syria with arms by the US, Mikdad said “we don’t want to be enemies with any country in this world, particularly in the current circumstances.”

He indicated that there is a secret program by the US to support the militants, through which the terrorists groups have been supplied with everything such as chemical materials, explosive devices, shells and bombs, adding “we are happy that this program is over as we have learned and heard through media outlets.”

“The British role was also known of supplying terrorists with arms, and I think that a lot of British officials are proud of their relations with militants in Syria, therefore, the materials which we have displayed in videos prove with no doubt that the Western states in general are involved in supporting terrorist groups in Syria through supplying them with chemical substances and other things to blame the Syrian Government for using them after they are used by these terrorist organizations,” Mikdad added.

“After the unjustified US attack against al-Sha’airat Airport, we would not be surprised by any foolish act by the US or in alliance with others. Today, the international coalition is shelling hospitals and killing innocents whether in Deir Ezzor or in Raqqa, and they used to blame government in the past for such acts,” he went on to say.

The Deputy Minister added that the campaign launched against Syria regarding the use of chemical weapons was meant to justify any reckless act they might do because they haven’t been able to achieve what they want through their terrorist pawns, indicating that Israel stands behind all of these attempts to continue to weaken the Syrian Arab Army and to divert it from its main battle of restoring the legitimate historical rights, whether in restoring the lands of the occupied Syrian Golan or the occupied Palestinian territories.

Mikdad affirmed that there is daily coordination between Syria and Russia on different issues, saying “we know everything what is going on. Whether some of the measures are announced from Moscow or Damascus, eventually they take place on Syrian territory.”

He indicated that the Russian friends are the ones who care most about Syria’s territorial integrity, independence, and sovereignty, adding that the Russian friends intervened in the crisis in Syria because they respect the sovereignty of the country and because they coordinate with the Syrian government and their intervention came upon a request by the Syrian Arab Republic.

“Coordination is ongoing between the Syrian and Russian sides at the highest levels and in different domains, and the process of announcing some of the procedures from here or from there is a technical process that is subject to many considerations, and we appreciate and understand that,” Mikdad said.

Regarding the intention to hold elections for establishing local councils in certain Syrian areas, Mikdad said “we of course only recognize the local councils established by the government of the Syrian Arab Republic. There are special circumstances, and there may be councils that have been established a long time ago, but we don’t recognize them at all, except when it comes to some of the measures which must be done to facilitate the life of the people.”

“These councils have not been established yet, and we are studying this issue with the Russian sides to reach a common understanding,” he added.

Mikdad noted that there are demands by some of the components of the society and these demands are discussed within certain frameworks at the government’s institutions and in the framework of preserving Syria’s territorial integrity.

“Those dreamers should abandon any more diabolical dreams, because that would lead to more killing and more bloodshed which the government of the Syrian Arab Republic seeks to stop,” he concluded.

Mikdad: Syria will not give up any inch of its land 2017-08-07
ruaa-jazaeri
Share
Previous Monday weather forecast: Temperatures above average, skies clear
Next Army Air Force destroys ISIS gatherings and vehicles in different areas across the country