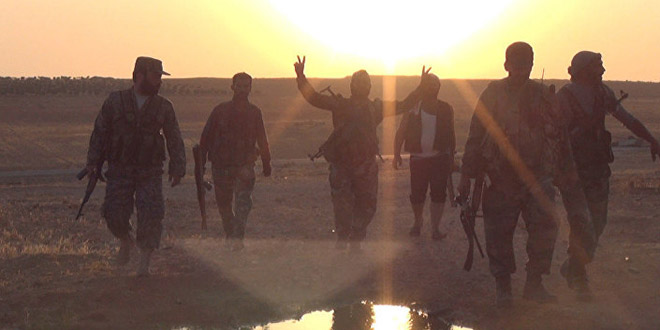 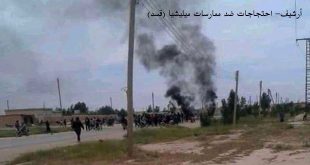 Provinces, SANA – The army has re-established control over several villages and towns in the course of its continued “successful” operations in the Syrian Badia, a military source announced on Wednesday.

Those areas are Huweijet Shanan, al-Rahbi, al-Sabkheh, al-Jebli, al-Rabieh, al-Ziabiyeh, al-Mastaha, Shumra and Islam and al-Jaraie oil wells in the southern countryside of Raqqa province, according to the source, who added that the area that came under the army’s control is almost 30 km along southern bank of the Euphrates River.

The operations, which started on the 14 of last month, have so far resulted in the death of large numbers of ISIS terrorists, while hundreds of others were injured, in addition to the destruction of 330 vehicles of various types, 12 command centers, 3 tanks and combat vehicles, 3 ammunition and equipment depots, 11 cannons and 5 machine guns, the military source said.

A number of foreign terrorists were identified among the dead, added the source, including from Tunisia, Libya, Morocco, Saudi Arabia and Chechnya.

The reporter added that the army airstrikes targeted ISIS positions in Maadan city, 40 km southeast of Raqqa, and the villages of Khomaisiyeh, al-Jaber, Moqlet Kabir and Moqlet Saghir, killing and injuring large numbers of the terrorists and destroying weapons and munitions depots.

An Army and Armed Forces unit thwarted an attack carried out by ISIS terrorists accompanied by vehicle rigged with explosives on a military post in al- Shoumariyeh Mountains, 70 km east of Homs city.

SANA’s reporter said that the unit clashed with the attacking terrorists, destroying the vehicle and leaving most of the attackers dead or injured.

In the eastern countryside of Homs province, a military source said that the Syrian Air Force carried out intensive airstrikes against
ISIS hideouts and gatherings in Hmaimeh village, southwest of Abu Kamal city.

The source added that the airstrikes destroyed ISIS vehicles and hideouts in addition to killing and injuring a number of terrorists.

The Syrian air force launched airstrikes against supply points and gatherings for ISIS terrorists in a number of villages in the eastern countryside of Hama,
destroying two vehicles rigged with explosives.

SANA’s reporter in Hama said that an army unit destroyed two vehicles rigged with explosives for ISIS terrorists in the surroundings of Marina Mountains which were moving towards a military point east of Atheria area in the eastern countryside of Hama. 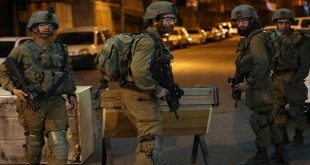