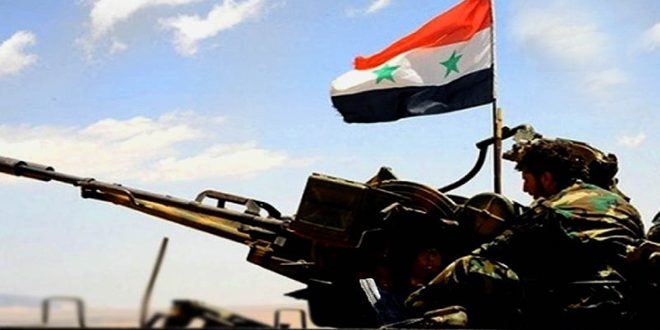 Provinces, SANA- Army and Armed Forces units thwarted an attack by ISIS terrorists on military posts in the eastern countryside of Homs province, killing scores of them and injuring others.

SANA reporter in Homs said that army units, in cooperation with popular defense groups, engaged in violent clashes with ISIS-affiliated terrorist groups which attacked military posts in the surroundings of Maksar al-Husan village in the eastern countryside.

The reporter added that more than 40 terrorists were killed in the clashes and others were injured, while the remaining ones fled, leaving their arms and ammunition behind.

Later, units of army, in cooperation with the backup forces, established control on hills overlooking al-Bgheilieh in Homs eastern countryside, inflicting heavy losses upon ISIS terrorists in personnel and equipment.

Units of the army also continued their military operations in al-Badyah, establishing control over strategic hills and points in al-Qleilat mountain near al-Hill well, killing a number of the terrorists.

Meanwhile in Hama, an army unit thwarted an attack carried out at dawn by Jabhat al-Nusra terrorists on al-Zara Power Station from the direction of Herr Benafsoh in the southern countryside of the province.

A military source said that many of the terrorists were killed or injured in the clashes, and their weapons were destroyed, while the remaining terrorists fled.

Army units, supported by the Syrian Air Force, killed a number of ISIS terrorists in the Deir Ezzor province.

SANA reporter in Deir Ezzor said that a number of ISIS terrorists were killed and others were injured due to army’s strikes on their dens in the neighborhoods of Khasarat, Kanamat and al-Ommal, the area surrounding the Airport, the graveyards, al-Panorama and the villages of al-Bogheiliyeh, Safira Tahtani, al-Husseniyeh, al-Boleil and al-Mohassan city.

The Saudi terrorist Abu Dojana al-Ghamidi, the “leader of the airport operations sector” at ISIS and the terrorist Khaled Ayed al-Barjas, “the leader of ISIS in al-Mohassan city” were identified among the dead.

The reporter said that an army unit eliminated terrorist groups affiliated to ISIS who attacked military points in the direction of the Heart Hospital and Furat al-Sham Hotel.

The sources also said that a state of turmoil and confusion still prevails among ISIS terrorists, where clashes erupted among groups of them in the area of al-Souar, which led to the injury of ISIS leaders: Abu Mosaab al-Falastini and Abu Omar al-Australi.