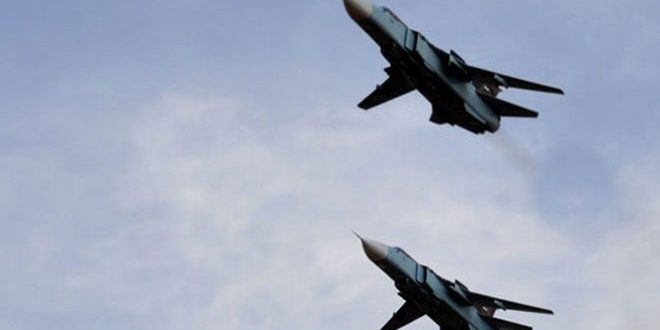 Deir Ezzor, SANA – The Syria Air Force destroyed barricades, fortifications and vehicles for ISIS terrorists as a result of strikes that hit their gatherings and supply routes, leaving many of them dead, including foreigners, in the surrounding of Regiment 137, Jneid group, al-Caravanat area, al-Orfi, al-Jafra crossing, al-Ziraa, al-Halabiyeh roundabouts, al-Husseiniyeh and al-Huweiqeh in Deir Ezzor province, according to SANA reporter.

The reporter quoted local sources as saying that 6 ISIS terrorists were killed or injured when an explosive device went off as they were rigging it in one of their hideouts in Buqrus Fouqani town in al-Mayadin area in the eastern countryside of Deir Ezzor province.

The sources referred to a state of tension between the so-called “security officials” and the “Islamic police” of ISIS in most areas in the western countryside of Deir Ezzor. The tension followed the arrest of one of the senior leaders within ISIS “Moussa al-Hassan”, whose followers later raided the headquarters of the “police” where they killed one there and captured another.

In a relevant context, the sources pointed out that after the Syrian army and allies’ recent advance in the Badia and their control over a number of points and hills overlooking Hamimeh area on the border between Homs and Deir Ezzor, ISIS terror organization has started transferring its heavy equipment, tanks and cannons from the area of the Green Belt surrounding al-Bukamal city towards the residential neighborhoods of the city.

ISIS terrorists are also building barricades and fortifications in al-Mayadin city and are working on equipping tunnels and booby-trapping the main street in the city, according to the sources.