Update-Al-Jaafari: We are still discussing mechanisms of implementing the de-escalation zones agreement 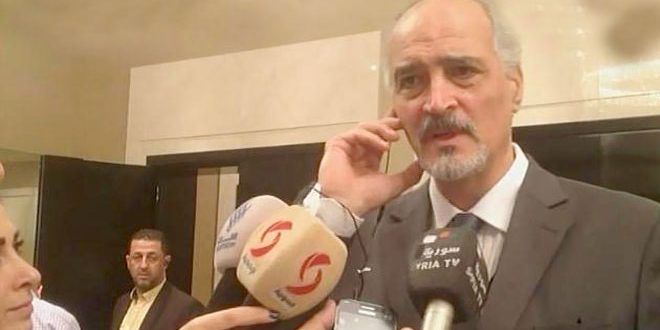 Astana, SANA -Delegation of the Syrian Arab Republic, headed by Dr. Bashar al-Jaafari, held a second consultative meeting with the Russian delegation, headed by Director of the Middle East and North Africa Department of the Russian Foreign Ministry Sergei Vershinin, in the framework of Astana 5th meeting works.

Earlier, al-Jaafari announced that the delegation is still in the process of discussing the mechanisms of implementing the de-escalation zones agreement.

In a press statement in the Kazakh capital  where the fifth round of Astana meeting on Syria is taking place , al-Jaafari said “We are still in the framework of diplomatic discussion on how to bring attitudes closer and find common denominators to focus on them for building a unified position.”

“We are still in the beginning, and we have not yet finished discussing the mechanisms related to implementing the agreement,” he added, noting that the delegation of the Syrian Arab Republic spend the whole day discussing these mechanisms with the Russian and Iranian delegations.

“All the meetings we held today are related to this topic, and the main topic of this round will be the mechanisms of implementing the agreement in the de-escalation zones that were approved in the previous round.”

Earlier, the delegation of the Syrian Arab Republic held  a consultative meeting with the Iranian delegation headed by Assistant Foreign Minister Hossein Ansari Jabari on the agenda of the fifth Astana meeting on Syria.

Earlier on the day, the guarantor countries of the cessation of hostilities in Syria  (Russia, Iran and Turkey) held two sessions of talks at the level of technical experts on the frontiers and maps of the de-escalation zones in Syria.

In a statement to reporters, Russian Presidential Envoy for Astana talks Alexander Lavrentiev said that the 5th Astana meeting aims at reaching an agreement about the de-escalation zones, whose details are being now discussed to be agreed upon.

Lavrentiev said that tripartite consultations are underway with the Iranian and Turkish delegations on the level of experts and after lunch, the delegations will hold expanded meetings on a higher level, noting that this should result in the establishment of de-escalation zones.

He stressed that efforts are exerted now to reach an accord on the criteria and details, describing the stances of the participant delegations and the guarantor countries as “very positive.”

He pointed out to the support provided by the US delegation, which participates on a high level headed by Acting US Assistant Secretary of State for Near Eastern Affairs Stuart Jones.

The head of Iranian delegation to the fifth Astana meeting on Syria, Assistant Foreign Minister Hossein Jaberi Ansari, discussed on Tuesday with the UN Special Envoy for Syria Staffan de Mistura the latest developments related to Geneva and Astana talks.

Ansari said that Astana and Geneva talks are two processes that complement each other, adding that all necessary needs must be provided for the progress of these talks.

He highlighted the role of the UN in providing technical assistance to contribute to the maintenance of the de-escalation zones in Syria and to help continue the process of the Syrian-Syrian talks in order to reach a comprehensive national reconciliation.

For his part, de Mistura expressed the UN support for the role of the guarantor countries of the Astana talks that are Iran, Russia and Turkey, calling for providing more assistance in order to strengthen the UN efforts in the context of the Geneva talks.

The Kazakh Foreign Ministry had announced that all the delegations participating in the 5th Astana meeting on Syria scheduled today and tomorrow arrived in the Kazakh capital of Astana, and that Tuesday will be dedicated to bilateral meetings while a plenary meeting is scheduled for Wednesday.

The Ministry said that all the delegations participating in the negotiations within the framework of the Astana process arrived in the Kazakh capital, including nine representatives of the “armed opposition” and UN Special Envoy for Syria Staffan de Mistura.

Astana hosted four meetings on Syria, and the Russian de-escalation zones memorandum was signed at the last meeting held in May.

Tunis, SANA-  Hundreds of Tunisians took to al-Habib Bourguiba Street in the Tunisian capital of …