Army establishes control over areas in Damascus countryisde, kills scores of terrorists in many regions across the country 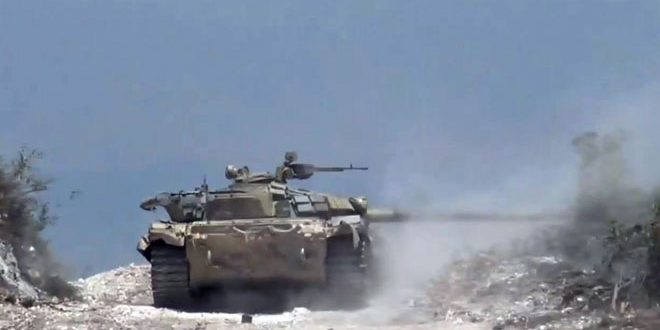 A military source told SANA that the army units engaged on Wednesday in fierce clashes with ISIS terrorist groups which attacked military points on the direction of al-Jbeileh neighborhood, al-Tanmieh sector, and near the graveyards area in Deir Ezzor.

The source said that the clashes ended up with foiling the attacks, killing 11 terrorists and injuring others.

Meanwhile, SANA’s reporter said that the army’s artillery targeted gatherings for ISIS terrorists in the surroundings of al-Sinouf hill, al-Taim field, and the neighborhoods of al-Hweiqeh and al-Omal, killing and injuring a number of terrorists.

The reporter added that the Syrian Air Force killed in a series of airstrikes several ISIS terrorists and destroyed three of their vehicles in Hweijet Katea, the neighborhoods of al-Sinaa and al-Hamidieh, and the surroundings of Liwa al-Tamin.

Army units killed scores of Jabhat al-Nusra terrorists and destroyed an anti-tank rocket launcher that belongs to them in Mlaihet al-Atash and Daraa al-Balad in Daraa province and in Tiloul Salman in the northeastern countryside of Sweida.

Meanwhile, terrorist organizations acknowledged on their pages on the social networking websites that 12 of their members were killed in Daraa al-Balad area, including terrorist Bilal Yasein al-Masalmeh, the leader of the so called “Seiouf Horan Battalion” and the military leader Isaa Mohamed Salameh al-Masalmeh.

A military source announced that the army established control over Ber al-Qasab region, the main center for Jabhat al-Nusra in Damascus south-eastern countryside and a number of strategic hills after eliminating their last gathering in the area.

It affirmed that the army’s operations ended up with the killing of a number of Jabhat al-Nusra terrorists, destroying their weapons and seizing a large quantity of their munitions.

A military source told SANA that army units intensified their strikes against gatherings and movements of Jabhat al-Nusra in al-Rawabi, Tal Rinaba, and the area surrounding Beir al-Qasab and Rajm al-Sarihi in the southeast parts of Damascus Countryside.

The source added that tens of terrorists were killed due to the strikes in addition to destroying 3 vehicles equipped with heavy machineguns, 4 transport vehicles, 5 motorcycles, and a stationary rocket launcher.

SANA’s reporter said that army units targeted ISIS terrorists’ sites and movements in the area between the oil line and Taberet al-Deibeh east of Salamyia area, killing and injuring many of the terrorists and destroying weapons and ammunition that were in their possession.