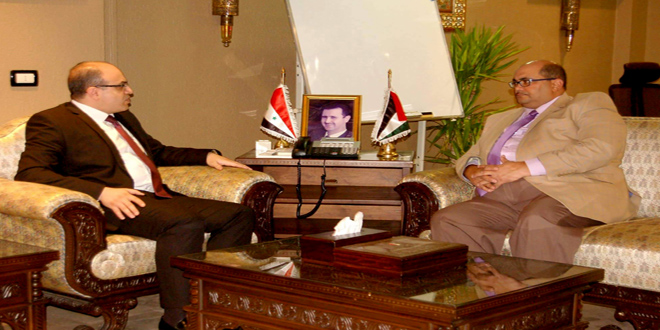 Damascus, SANA – Minister of Economy and Foreign Trade Mohammad Samer al-Khalil called on the investors and companies in South Africa to activate their investment activities in Syria and participate in exhibitions held in the country to increase economic and trade cooperation between the two countries.

During a meeting with Ambassador of South Africa in Damascus Shaun Byneveldt, al-Khalil pointed out the importance of the participation of South Africa in the activities of the Damascus International Fair that will be held next August, noting that more than 2,000 businessmen from outside Syria will be invited to attend the exhibition, in addition to giving the opportunity to hold many commercial and investment partnerships.

For his part, Byneveldt affirmed the need to strengthen relations of cooperation between the two countries at all levels, adding that the South African businessmen delegation who visited Syria last May will visit it again in July to sign a number of memorandums of understanding to develop cooperation.

He also stressed the great interest on the part of companies from South Africa to participate in the events of Damascus International Fair and the exhibition for reconstruction in Syria.

Later, Chairman of the Board of 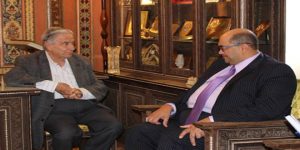 Damascus Chamber of Commerce Ghassan al-Qalaa discussed with Byneveldt ways to activate economic and trade relations between the two friendly countries and the prospects of participation of South African companies in the reconstruction phase and benefit from their expertise in this field.