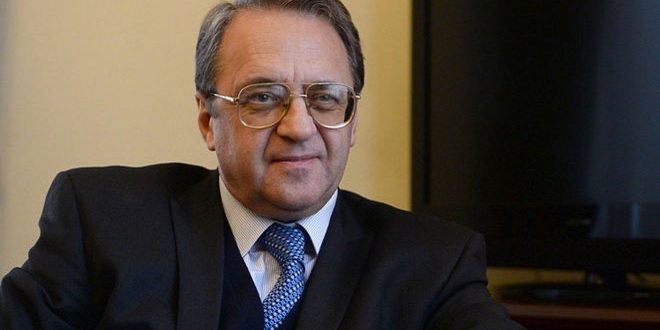 Moscow, SANA – Special Envoy of the Russian President for the Middle East and North Africa Mikhail Bogdanov said that Moscow calls for holding a new meeting on Syria in the framework of the Astana talks in mid June.

Bogdanov said on Friday that communication is underway for setting the precise date of this meeting, which Russia hopes to be in mid June, voicing satisfaction over Kazakhstan’s readiness to host such a high-level meeting again.

He also said that UN Special Envoy for Syria Staffan de Mistura will arrive in Moscow next week to discuss the Astana meeting, and that the Russian side wishes to discuss with de Mistura issues related to Astana, Geneva, developments in Syria, bolstering the cessation of combat activities, fighting ISIS and al-Nusra terrorist, and pursuing a political solution based on Security Council resolution no. 2254 under UN supervision in Geneva.

The Russian diplomat underlined the need for holding discussions with Iran and Turkey alongside the discussions with de Mistura, in addition to discussions between Moscow and Damascus, voicing hope that Ankara would work actively regarding the “armed opposition” and that Jordan would make beneficial contact with groups in the south of Syria.