Mikdad: Those who think they’re safe from terrorism and extremism are totally mistaken 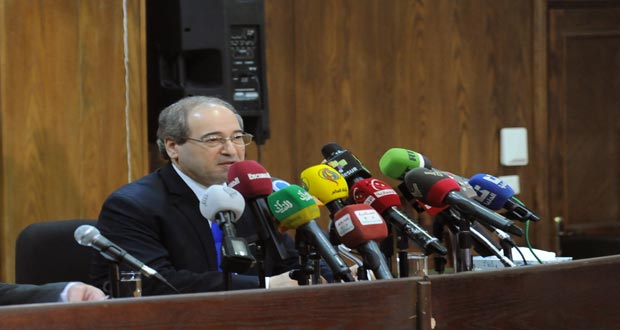 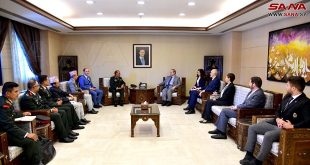 Damascus, SANA – Deputy Foreign and Expatriates Minister Fayssal Mikdad said that those who think that they’re safe from terrorism and extremism, whether they are from this region or elsewhere in the world, are totally wrong, and that Syria’s vision proved to be right when it warned years ago about the threat of terrorism expanding to the entire region and the world.

In a lecture delivered at Dar Al-Baath in Damascus on geopolitics in the Middle East and Syria’s steadfastness, Mikdad asserted that Syria will not hesitate to cooperate with any country that is fighting terrorism, except for those countries which claim to be fighting terrorism while they fund, support, and sponsor it, taking into account that terrorism crosses borders and can’t be combated without international coordination.

The Deputy Minister said that the Security Council resolution no. 2170, which imposes sanctions on those who fund and support the Islamic State of Iraq and Syria and Jabhat al-Nusra, reflects the international community’s will to combat terrorism, stressing that international coordination in this regard should be carried out via international agreements and resolutions that regulate it, and that any unilateral action would be considered interference in countries’ affairs.

“Everyone who provided support in any form to any group that bore arms against the Syrian state is considered a terrorist, and the international community must prosecute them and hold them accountable,” Mikdad said.

He said that Israel’s role in what is happening in Syria and the region must not be overlooked, as it’s obvious that Israel is playing a part in the chaos and spread of terrorism and that it benefits from them.

“The West worked to destroy the region and spread terrorism and fear, employing armed terrorist organizations and giving them direct and unlimited support in service of the goals of Zionism,” Mikdad said, asserting that the Islamic State of Iraq and Syria terrorist organization embraces Wahabi mentality and antagonizes other religions and creeds.

The Deputy Minister asserted that the Palestinian cause is what forms the features of Syria’s policies and that it will remain in the center of attention for the Syrian government no matter what happens in the region, warning that the Palestinian people are being subjected to a genocide and that “the recent aggression on Gaza is the best proof that Israel is the weapon of destruction in the region.”

Mikdad refuted the recent U.S. allegations that Syria didn’t fulfill its obligations regarding the disposal of chemical weapons, saying that these allegations show the aggressive nature of U.S. policy and its lack of honesty in wanting to rid humanity of WMDs, because if it actually wanted that, then it would have ordered Israel to dispose of its WMDs.

He said that the U.S. must refrain from using international resolutions to interfere in other countries’ affairs, stressing that the U.S. lacks any credibility, and that unless it stops supporting terrorism and orders its allies including Erdogan to do so, noting that the Turkish government is directly involved in supporting the Islamic State of Iraq and Syria and other terrorist organization, as it funds, arms, and trains them and facilitates their crossing into Syria.

“The United States, Britain, and France are responsible for the escalation of terrorism in the region, and they must stop supporting it because it poses a threat to them just as much as it threatens all countries of the region,” he added, noting that the Security Council has ignored hundreds of Syrian letters on terrorism and the practices of terrorist groups.

Mikdad also stressed the need to cooperate with the Lebanese government to combat terrorism, despite the existence of some isolationist forces in Lebanon that support terrorism, noting that the allies of terrorism in Lebanon continue to defend it despite the fact that it began to reach their towns and at the expense of the Lebanese army and their country’s future.