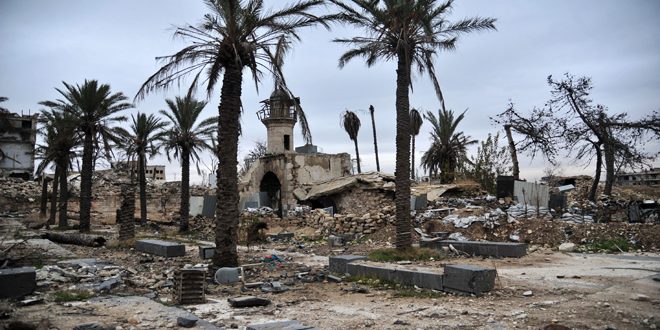 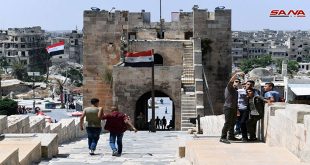 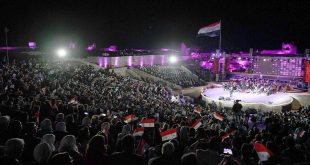 Damascus, SANA – Director General for Antiquities and Museums Ma’moun Abdul-Kareem affirmed on Thursday the documentation of 250 archaeological buildings in the Old City of Aleppo by experts and cadres of the Directorate as part of the integrated plans for the rehabilitation of the city- listed as a UNESCO World Heritage site- and the restoration of damage caused by the activities of the terrorist organizations.

In a statement to SANA, Abdul-Kareem said that as a result of the real assessment of the damage caused to archaeological sites in the Old City of Aleppo, about 40% of the city’s ruins suffer minor damage and are in good condition, 30 % sustained medium damage, while the rest were severely damaged, especially concerning the facade of Aleppo Citadel, the Carlton Building, al-Saraya, the Khusruwiyah School and the al-Hatab Square.

“About 60% of the archaeological markets in Aleppo are devastated and in a catastrophic situation,” he said.

He pointed out that the Directorate, in coordination with the governorate of Aleppo and the ministries of Awqaf (Religious Endowments) and Tourism, is carrying out emergency work first and assessing the damage to adopt a comprehensive national plan to restore the city of Aleppo, taking into account the scientific rules and identity of the city, in accordance with the conditions of international rules implemented by the UNESCO and international organizations.

He affirmed that the Directorate relocated a large part of the antiquities from the Palmyra Museum to safe places in Damascus a few days before ISIS attack on 21/5/ 2015, adding that when ISIS attacked the city of Palmyra for the second time, the museum was completely empty of antiquities except for 4 or 5 large pieces.

He revealed that 89 pieces of antiquities that had been earlier stolen by terrorist organizations from inside Syria and smuggled abroad have been retrieved.

He expressed his optimism about the ability of the concerned parties Syria, in cooperation with the international organizations, particularly the Interpol and the UNESCO, to restore archaeological artifacts that have been smuggled abroad by resorting to judicial or diplomatic means in the future, pointing out to the international resolutions issued in this regard, including the new UN Security Council resolution no.2347 for 2017 on criminalizing any sabotage or smuggle of the world cultural heritage.