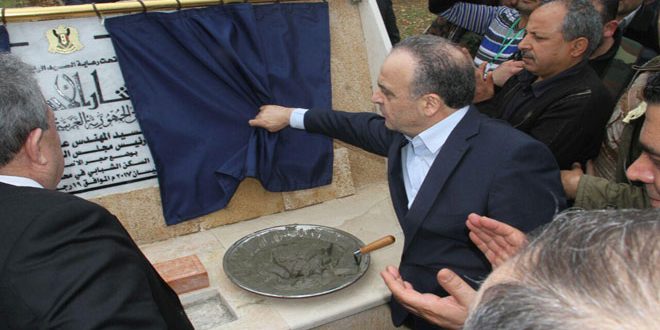 Tartous, SANA – Prime Minister Imad Khamis and members of the Cabinet conducted an inspection tour of Tartous city which covered a number of projects. 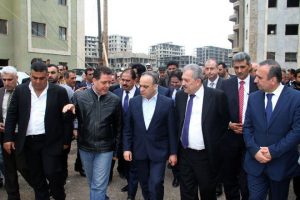 During this tour, Premier Khamis laid down foundation stone for the second stage of the youth housing project in Tartous, which consists of 1,700 housing units and has a cost of SYP 13 billion, and inspected work in the first stage of the project which consists of 1,032 housing units, with the Premier stressing the need to finish the project within two and a half years.

Khamis and the accompanying delegation also inspected the two road junction projects in the northern and southern entrances of the city, where the Premier instructed for providing the necessary funds for finishing them within two months which amounts to SYP 1.3 bullion.

The Prime Minister also inaugurated the Citizens Service Center at the General Secretariat of Tartous Governorate which provides paperwork services, inaugurated the Blue Bay resort which contains 48 chalets, 112 beds, and provides up to 125 job opportunities at a cost of SYP 400 million, and inspected work at the al-Manara resort and chalets and the eastern seaside corncihe, where he met with locals and listened to their issues and comments, in addition to visiting the Agricultural Training and Rural Development Center and Tartous University, where he met its rector and faculty members.

Premier Khamis and members of the Cabinet on Friday met representatives of state establishments and city councils and People’s Assembly members from Tartous province.

During the meeting which was held at Tartous Governorate council, Premier Khamis said that the government and the Syria Trust for Development allocated SYP 10 billion allocated to a project for supporting injured people, asserting that state establishments are working to provide citizens’ needs despite the limited resources. 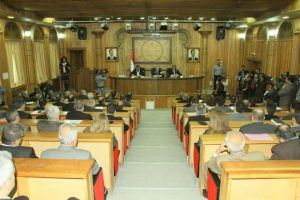 Khamis said that a plan has been implemented to improve the state of the electric power grid and contracts valued at USD 300 million were signed to procure petroleum, adding that there’s a plan to provide SYP 300 billion in loans to support agriculture.

In turn, Petroleum Minister Ali Ghanem said that the losses of the petroleum sector in Syria during the crisis are estimated at USD 66 billion, lauding the efforts of the workers in this sector as the Homs and Banyas refineries have produced a large output that resulted in large sums of savings.

For his part, Tourism Minister Bishr Yazigi said that Tartous will become the capital of tourism in Syria thanks to a work plan that covers various projects, while Local Administration and Environment Minister Hussein Makhlouf said that SYP 4 billion were allocated to provide new vehicles for city councils and governorates, in addition to around SYP 1.5 billion from customs fees to Tartous Governorate, SYP 350 million to Tartous City Council, and SYP 100 million for supporting industrial zones in the province.

Meanwhile, Internal Trade and Consumer Protection Minister said that one of the ministry’s project is a retail outlet where injured people can work in exchange for a salary and a cut of profits, in addition to opening business development centers that include sorting and packing lines for agricultural products and storage facilities.

Participants in the meeting called for establishing a dry dock to repair ships, revitalizing stalled projects, using solar power to provide electricity, and opening factories for processing fish, among other issues.