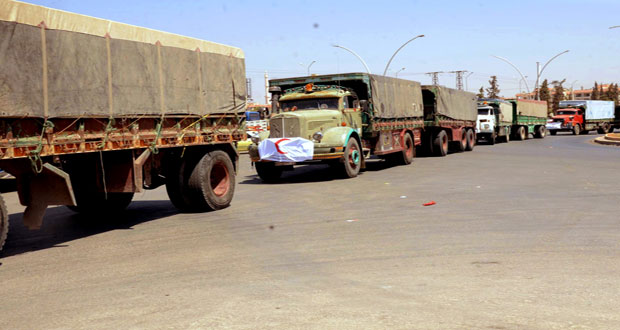 Daraa, SANA –A humanitarian aid convoy loaded with 16,000 food and medical packages was delivered to the eastern countryside of Daraa by the Relief Subcommittee in Daraa province with support from the Syrian government.

Daraa Governor Mohammad Khaled al-Hanous said that the aid, which consists of 400 tons of relief items, will be distributed among displaced and affected people in 16 towns in villages in the province’s east countryside.

The areas where the aid will be distributed are Nassib, al-Mataiya, Tisia, Samad, al-Sahwa, Ghosm, Maaraba, al-Ghariya al-Sharqiya, al-Ghariya al-Gharbiya, Kahil, al-Jiza, al-Msaifra, Oum Walad, al-Karak al-Sharqi, Oum al-Mayazen, and Seda, in addition to the town al-Naima where the aid was delivered with the aid of locals and heads of municipalities.

Director of Operations at the Syrian Arab Red Crescent (SARC) Firas al-Naqib said that all relevant authorities cooperated to ensure that the convoy reaches its destination unhindered, noting that the international highway between Damascus and Daraa was safe as the team accompanying the convoy can testify.

Al-Naqib also said that another convoy will be delivered to Daraa’s eastern countryside within the next two days.

Head of SARC branch in Daraa Ahmad al-Masalmeh said this convoy is the first shipment in the second stage of the humanitarian response plan which covers the entire province, and that a team of 30 SARC volunteers is supervising the delivery process.