Al-Jaafari following talks with de Mistura: We focused on counter-terrorism and assessed the Geneva and Astana tracks 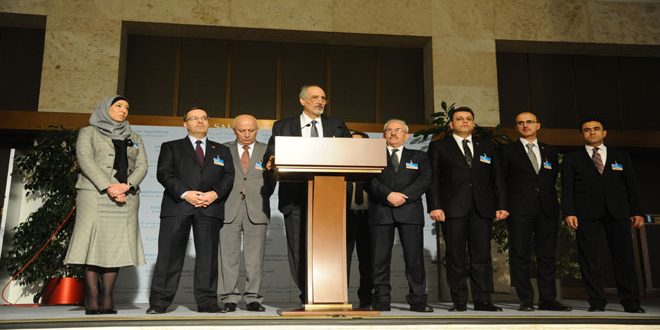 Geneva, SANA – Head of the delegation of the Syrian Arab Republic to Geneva Bashar al-Jaafari said that the fifth round of the Syrian dialogue in Geneva started with a background of escalation by Jabhat al-Nusra and other terrorist organizations affiliated to it, and this is not the first time that such escalation was carried out simultaneously with the initiation of rounds of talks or political initiatives, whether in Geneva or Astana.

In a press conference following his meeting with UN Special Envoy for Syria Staffan de Mistura on Friday, al-Jaafari stressed that the latest escalation is worth noting in terms of timing, the form, and the substance of the escalation.

He said that this time, the participants in the attacks starting from the neighborhood of Jobar of Damascus were Jabhat al-Nusra, Failaq al-Rahman, and Jaish al-Islam, adding that these factions have been fighting the Syrian Army and fighting among themselves as well in line with the instructions given to these faction by their handlers, but when the instructions were sent by these handlers to unite under the umbrella of al-Nusra, those who had been fighting each other yesterday became partners today. 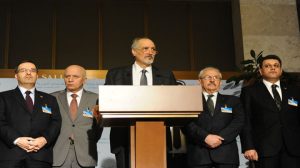 Al-Jaafari pointed out that the important background of this information is that Jabhat al-Nusra is considered as a terrorist group by the UN Security Council, therefore all those who work with it are to be considered a terrorist as well, and any government that deals with al-Nusra and any groups associated with it will be considered as a sponsor of terrorism, so the fact that the Turkish, Saudi, French, Qatari, Jordanian, British, and Israeli regimes are dealing with terrorists is not a difficult conclusion to reach.

On the current attack on Hama countryside, al-Jaafari said that the groups participating in it are Jaish al-Nassr, Jaish al-Izza, Faliq al-Sham, and Jaish Idleb al-Hurr, and these are led by Ahrar al-Cham al-Nusra, adding that all these factions are controlled by the Turkish secret services.

“Of course it is clear that the participants with al-Nusra in the attack on eastern Damascus and Hama countryside are factions that had participated in the Astana meetings and this is an indication of the involvement of the aforementioned regimes in the terrorist attacks in Syria,” he added.

“When a terrorist attacks the British Parliament in London, the UK mobilizes all its forces and its nuclear, biological, chemical, and traditional weapons to kill this single attacker, and when another terrorist named Mohamed Marrah attacked one city in France, he was killed with 300 bullets, but when a terrorist attacks the Justice Palace in Damascus, the western media, including the British and French, call him a jihadist,” he said.

Al-Jaafari added that the fact that these terrorist groups are now under the umbrella of Jabhat al-Nusra is but a failed attempt to cover up their terrorist nature and their violations of the cessation of hostilities agreement declared in 29/12/2016.

“It has become very common these days for terrorist groups like Jabhat al-Nusra itself and terrorist groups affiliated with it to change their names every 24 hours or so, and that is to avoid being classified as a terrorist organization for dealing with al-Nusra, but this is well understood by the terrorism specialists in Damascus and other cities and in the Security Council,” he said.

“Let’s not forget the terrorist bombings that struck Damascus before the start of this round, bombings which have resulted in the killing of many innocent civilians. In this regard, I’d like to mention a painful incident at the UNSC, where the Russian delegation submitted three draft press statements, the first condemning the terrorist attacks in Homs, the second condemning the bombing in the Justice Palace in Damascus, and the third condemning the targeting of the Russian Embassy in Damascus, but the delegations of US, France, and the UK objected to these draft press statements, and therefore these statements were not adopted,” Al-Jaafari added.

“We won’t forget either the inhabitants of eastern Damascus who have been subjected to indiscriminate terrorist shells and explosive bullets for years and in recent days, and they’re still steadfast in their homes. Yesterday, the terrorists shelled the only hospital in Fares al-Khoury Street which is called al-Zahrawi Maternity Hospital, which is the only hospital in east Damascus that offers medical services for pregnant women,” he went on to say.

“For all these reasons, we focused today in our first meeting in Geneva 5 on combating terrorism, especially in light of the events that we mentioned to you in the terrorist attacks targeting Damascus and Hama, and based on the request of UN Special Envoy, we assessed the tracks of Geneva and Astana, and we commend the Astana track and the positive and constructive Russian initiatives on stabilizing the ceasefire and on combating terrorism and finding a political solution to the crisis in Syria through continued coordination between President Bashar al-Assad and Russian President Vladimir Putin,” al-Jaafari said. 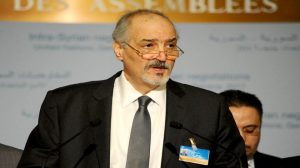 He pointed out that the Syrian Arab Republic delegation posed a number of questions to the UN Special Envoy to understand his position and the positions of the other parties regarding the situation in Syria.

In response to a question on the statements of some members of the Riyadh delegation who attempted to justify the attacks in Damascus and Hama, al-Jaafari said that these pro-terrorism statements was a point that was raised with de Mistura, and he understood this position and therefore the counter-terrorism basket will be discussed on Saturday, adding “such statements uncover the affiliation of those individuals and the agendas they work for, and this is what we have been saying for years.”

Al-Jaafari asserted that there’s no division of the four baskets of the Geneva talks, but there are necessities that will be resorted to such as starting discussing the counter-terrorism basket on Saturday because the main and prevailing issue on the Syrian scene now is terrorism.

In what’s to be expected from discussions with a group that sponsors terrorism and is part of it, al-Jaafari said that when members of the Riyadh group make statements supporting the terrorism in east Damascus and Hama countryside and openly call for alliances with al-Nusra, it means that they are terrorists as per Security Council resolutions, adding that one of the former heads of the so-called “coalition” which is the backbone of the Riyadh group called for repeating the terrorist attack in Homs across Syria, thereby identifying himself as a terrorist.

On whether there will be a political response to the terrorist attacks, such as withdrawing from the talks, al-Jaafari said that all the terrorist attacks have one goal which is undermining talks and Astana and Geneva, noting that the Syrian Arab Republic never threatened to withdraw from any of the talks in participated in, adding that terrorist attacks push everyone towards failure and loss on the diplomatic and political levels, therefore all governments that have common sense must maintain support for the diplomatic and political track in Astana and Geneva.

On the coordination between the US and the so-called Syrian Democratic Forces in the battle for Raqqa, al-Jaafari said that Syria well comes any side that wants to fight terrorism honestly and objectively and by coordinating with the Syrian government, not by ignoring it, but on the other hands sponsoring the US direct intervention, providing American weapons to some groups, and encouraging these groups to defy the Syrian state’s authority doesn’t serve fighting terrorism, as the only way to defeat ISIS is by coordination and cooperation with the Syrian Arab Army.

Regarding reports of an imminent US or Turkish operation against ISIS in Raqqa, al-Jaafari said that any foreign military presence on Syrian soil without the Syrian government’s approval is illegal, adding that it’s shocking to see some Western representatives at the Security Council continue to describe ISIS as “jihadists” until this moment, and the same goes for French officials and media till this moment. 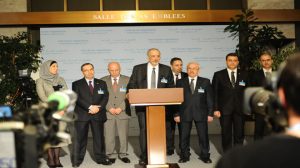 He said that the claim that the factions working under the directions of the invading US forces are fighting ISIS is incorrect, because the Syrian Arab Army is the one fighting ISIS with the aid of Russia and Iran, adding that the US airplanes have bombed a school in al-Mansoura town in Raqqa countryside, killing 237 out 500 displaced civilians who had fled ISIS and took refuge in that town, only to die by American bombs.

In response to another question, al-Jaafari said that France and Britain sponsor terrorism and exploit it politically, and their governments think they’re clever enough to prevent terrorism on their own soil, adding that a few years ago when former British Prime Minister David Cameron used excessive force when there had been riots in London, he said at the time “When it comes to National Security don’t talk to me about human rights!”

He went on to say that Britain and France sell weapons valued at hundreds of billions of dollars to Saudi Arabia, Qatar, and other Gulf regimes that sponsor terrorism.

On whether recent events in Syria altered the work plan, al-Jaafari said that the agenda has four baskets that will be addressed in parallel and that are of equal value, but developments necessitate beginning with the counter-terrorism basket, something which the UN Special Envoy understands and this is why he agreed to this, adding that this doesn’t mean neglecting the other baskets but only priorities counter-terrorism due to current events, and those who object to this will expose themselves as sponsors of terrorism.

On the Syrian government refusing a request by de Mistura to visit Syria and holds talks there, al-Jaafari said that the Syrian government has been cooperating with the Special Envoy continuously since the Geneva track began, but when he oversteps his jurisdiction, we inform him that he made a mistake in a tactful and diplomatic manner, and sometimes he justifies some mistakes by saying that he is under massive pressure from some states, so we help him shoulder this pressure.

De Mistura: Today’s talks touched on essence of dialogue, there is consensus on moving forward with it

UN Special Envoy for Syria Staffan de Mistura said that the sides participating in the intra-Syrian talks in Geneva showed consensus on moving forward with talks. 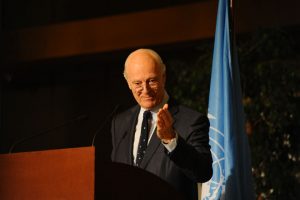 In a press conference on Friday evening, de Mistura said that the escalation on the ground is regrettable, and that suggestions were made to the guarantors of the Astana track to hold another round of meetings in Astana as soon as possible.

He said that Friday’s talks touched on the essence of the dialogue, and that the agenda has the support of the Security Council, adding that all delegations were given a chance to pick which one of the four baskets listed on the agenda they want to discuss first, but in the end all baskets must be discussed, noting that the Syrian Arab Republic delegation agreed to discuss all baskets.

De Mistura said that discussions will continue on Saturday, beginning with a meeting with the Syrian Arab Republic delegation at 11 AM.

Answering journalists’ questions, de Mistura said he doesn’t expect any miracles, breakthroughs, or breakdowns; rather he hopes to build upon what was achieved in the previous round.

The Special Envoy refrained to comment on the statements made by the Riyadh delegation in which they supported terrorist acts.

The fifth round of intra-Syrian talks in Geneva began earlier today.