Sosan to delegation of Syrian expatriates in Kuwait: We appreciate your support to the country in facing the conspiracy 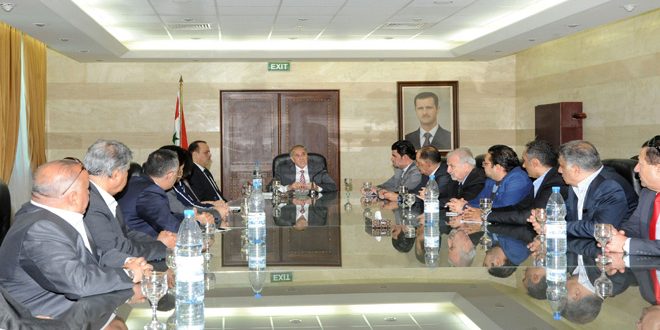 Damascus, SANA- Assistant Foreign and Expatriates Minister Ayman Sosan reviewed the latest developments of the terrorist aggression against Syria during his meeting with a delegation of the Syrian expatriates’ committee in Kuwait .

Sosan affirmed on Monday that the resilience of the Syrian people, courage of the Syrian army and wisdom of President Bashar al-Assad were able to thwart the conspiracy targeting Syria and the entire Arab Nation, hailing the victories achieved
by the Syrian Arab army, most recently, the liberation of Palmyra from the ISIS terrorists.

Syria has always interacted positively with all real efforts for finding a solution to the current crisis based on maintaining its territorial integrity, people’s unity and its independent national decision, Sosan went on to say.

He added that only Syrian people have the right to determine the future of their country and reject any foreign interference in their affairs.

Sosan highly appreciated the Syrian expatriates’ stances and support to their motherland in the face of the conspiracy targeting it.

For their part, members of the delegation reiterated their unlimited support to Syria,
expressing pride in the historic steadfastness of the Syrian people and heroism of the Syrian army in eliminating terrorism.

They expressed readiness to provide everything that could enhance the resilience of their homeland and contribute to the rebuilding of what have been destroyed by terrorism.