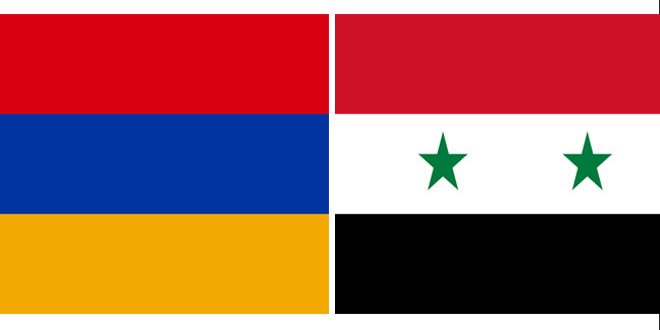 Damascus, SANA- Syria and Armenia have expressed willingness to move forward the relations of cooperation between the two friendly countries in various domains to uplift to the level of the standing historic political relations.

That came in the two letters exchanged between Deputy Prime Minister, Foreign and Expatriates Minister Walid al-Moallem and Armenian Minister of Foreign Affairs Edward Nalbandian on the 25th anniversary of the establishment of diplomatic
relations between the Syrian Arab Republic and Armenia.

al-Moallem stressed that establishing diplomatic relations between the two countries embodied the historic ties connecting the two peoples, hailing Armenia’s supporting stances to Syria in the face of terrorism.

For his part, Nalbandian reiterated the appreciation of the Armenian people for the
humanitarian support provided by the Syrian people to the Armenian Genocide survivors, stressing the need to enhance peace and security in Syria and condemn the international terrorism.