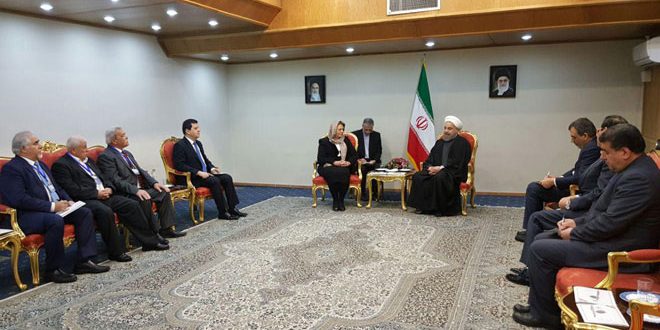 Tehran, SANA – Iranian President Hassan Rouhani affirmed that his country will continue supporting Syria in various fields, and that establishing peace and security in Syria benefits Palestine and the entire region.

Receiving Speaker of People’s Assembly Hadiyeh Abbas on Wednesday on the sideline of her participation in the 6th International Conference in Support of the Palestinian Intifada, Rouhani congratulated the Speaker over the victories achieved by the Syrian Army and people in the battle again terrorism, reiterating Iran’s support for the Syrian people and for intra-Syrian talks.

He pointed out to the difficult conditions affecting the Syrians due to the terrorist war imposed on their country, noting that Syria’s support for the Palestinian people has made it a target or pressure throughout the past years.

For her part, Abbas voiced the appreciation of the Syrian government and people for the continued support provided by Iran which played a major role in victories and achievements that were made.

She relayed the greetings of President Bashar al-Assad to Rouhani and Supreme Leader of Iran Ali Khamenei and his appreciation for Iran’s support to Syria, noting that cooperation and coordination between Syria, Iran, and Russia has made strategic achievements in fighting terrorism.

Abbas said that the terrorist war targeting Syria targets the Palestinian cause as Iran is the front line of the resistance in the region, affirming Syria’s commitment to boosting relations with Iran and all fields and underlining the importance of bilateral coordination in fighting terrorism.

Shamkhani: Iran supports Syria in the fight against terrorism

Later, Iranian Secretary of the Supreme National Security Council Ali Shamkhani said that Iran was and is still standing by Syria in the fight against terrorism, stressing that the two states will defeat terrorism.

Shamkhani, meeting Abbas, said that Astana meetings found favorable conditions for the continuation of the cessation of hostilities and had dialogue instead of war. He added that the last Astana meeting showed the deep disagreements between Turkey and Saudi Arabia over the leadership of the armed groups, affirming that the meeting was a result of changes in the region balances, particularly the field achievements in the war against terrorism, most importantly, the liberation of Aleppo.

For her part, Abbas affirmed that pressures on Syria would not affect its support to the Palestinian cause.

She appreciated the Iranian government and people for their support to Syria, noting to the importance of cooperation, coordination and consultation between the two countries in combating terrorism.

The Speaker went on to say that the Zionist entity supports the terrorist groups in Syria in military and logistic domains, adding this leads to a strong correlation between Israel and those groups to create chaos in the region.

Abbas added that the Syrian leadership is determined to fight terrorism until purifying all Syrian territories from it, in addition to going ahead in the political track based on Syrian-Syrian dialogue and national reconciliations.

Abbas also held a meeting with Speaker of Iran’s Shura Council Ali Larijani, during which she said that the 6th International Conference in Support of the Palestinian Intifada held recently in Tehran came at a crucial time and a critical stage in the region which witnesses an escalation campaign to completely liquidate the Palestinian cause. She hailed Iran’s key role in supporting Syria’s steadfastness in all domains in the face of terrorist war imposed on it, affirming that there is a direct relation between targeting Syria and weakening its role towards the Palestinian issue, adding that it has become clear today for the people of the region that the Zionist factor and its ties with the Takfiri terrorism was the basis of the aggressive scheme against Syria, the resistance in Lebanon, and Iran.

Abbas went on to say that due to the faith, joint will, wisdom, and valor of the Syrian and Iranian leaderships, the goals of this scheme were foiled, reiterating the need for further coordination and cooperation between Syrian and Iranian MPs and parliaments as well as Russian and friendly parliaments.

For his part, Larijani affirmed his country’s continued support to the Syrian people till achieving victory and restoring security and stability to the country, asserting that Syria will achieve victory over terrorism due to the sacrifices and steadfastness of its people and leadership.

The Iranian official hailed the victories achieved by the Syrian Army and its allies against terrorism, pointing out that the parliamentary cooperation between the two sides is significant regarding issues of the Islamic world.