President al-Assad during video talks with President Putin: Int’l Conference on Refugees’ Return a beginning for solving this humanitarian issue Damascus, SANA- President Bashar al-Assad affirmed that the International Conference on Refugees Return, scheduled to be held in Damascus, is just the beginning of solving this humanitarian issue, indicating that the largest part of the refugees are willing to return to Syria.

President al-Assad, during talks with Russian President Vladimir Putin via video conferencing technique, noted that the largest part of refugees are willing to return to Syria after the state has created the appropriate conditions for that, and we hope that the Refugees’ Return Conference will come up with significant results.

“I am happy that this video conference was made between us, particularly before holding the Refugee conference during the coming days.. and I thank you for your interest in this issue.. the issue of refugees is a humanitarian issue for us and you and for a lot of countries, but for us, it is a national cause,” ,” President al-Assad said. 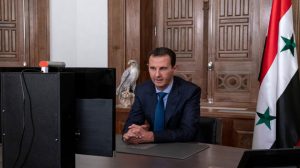 President al-Assad added that the largest part of the refugees strongly want to return to Syria, especially after the state provided a large number of facilitations, some of them legislative and some of them related to the procedures for their return.

“As you know, the largest part of the refugees were those who have escaped from terrorism, from the killing and fear.. another part has left because of the destruction of infrastructure, so the life in cities, villages or neighborhoods became impossible,” President al-Assad affirmed.

The President went on saying “each house in Syria is interested in the issue of the refugees, and this issue is a priority for us as a government in the coming period, especially after the liberation of a large part of the Syrian territories, and after the battlefield has receded despite the continuation of terrorism.”

President al-Assad indicated that the biggest obstacle facing the return of refugees is the Western siege imposed on Syria, on the state and the people, and thus the return of the refugees entails to secure the basic needs necessary for their livelihood.

President Putin, for his part, said that the volume of humanitarian catastrophe in Syria is still big, adding that Russia supports the convening of the international conference on the refugees and it does its best to make the conference a success.

He added that Russia will continue efforts to encourage the political solution to the crisis in Syria and preserve the sovereignty and territorial integrity of it.

President Putin affirmed that the Syrian government is interested in resolving the problem of refugees that become on a national level despite attempts by several countries to politicize it, even though it’s a humanitarian problem.

He added that the process of reconstructing Syria after ending the crisis requires, above all, the return of Syrian refugees to their homeland.

“The issue of returning Syrian refugees is important during this stage to Syria and all countries, particularly the neighboring countries,” Putin said, adding that in 2018, he called on the international community to support the Syrian government and the initiative of President Bashar al-Assad to repatriate the refugees to their Home and houses.

President Putin added that the Syrian government has taken measures to improve the living conditions and other issues which led to the return of more than one million persons to their home and this was done by the virtue of you, Mr. President.