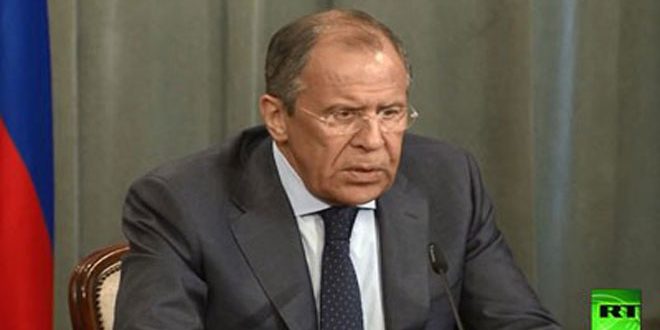 Moscow, SANA – Russia’s Foreign Minister Sergey Lavrov expressed his country’s satisfaction over the results of Astana talks to reach a settlement to the crisis in Syria.

Lavrov, in an interview with the Austrian magazine Profil, described the negotiations that took place on January 23–24 in Kazakhstan’s Astana as “an important and a whole new step in the peace-making progress.”

It’s worth mentioning that the final Joint Statement of Astana meeting affirmed commitment to the sovereignty, independence, unity and territorial integrity of the Syrian Arab Republic. It also provided for that the Syrian crisis can only be solved through a political process, in addition to announcing the establishment of a trilateral mechanism to observe and ensure full compliance with the ceasefire, prevent any provocations and determine all modalities of the ceasefire.

Regarding the Russian-US relations, Lavrov said that the US President Donald Trump’s stated stance of the need to build a good dialogue between the two countries “gives some hope for positive developments in our bilateral relations.”

“In their first phone conversation that lasted nearly an hour late last month, Russian President Vladimir Putin and new US President Donald Trump outlined their intent to cooperate on issues ranging from defeating Islamic State to developing bilateral economic cooperation on a constructive, equitable and mutually beneficial basis,” he noted.