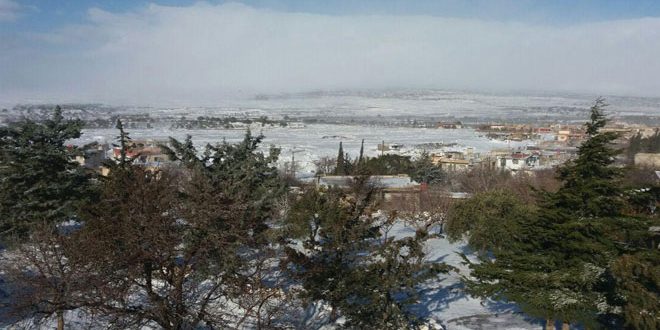 Damascus, SANA –Temperatures will drop to become below average by 5 to 7 degrees as the country is affected by law air pressure accompanied by cold and wet air mass in the upper layers of the atmosphere.

In it Saturday Bulletin, the Meteorology Department said that the sky will be partly cloudy and rainy in general, noting that the snow is expected over mountains of 700 m height. The efficiency of the low air pressure will decrease gradually and the weather will be extremely cold during the night. Ice is expected at the mountainous area and fog and frost in most of internal areas.

The winds will be westerly of moderate to active speed, while the sea waves will be medium to high in amplitude.

On Sunday, temperatures will gradually rise but remain below average by 3 to 5 degrees.  The sky will be partly cloudy.

Rainfall amounts are expected over different areas across the country.