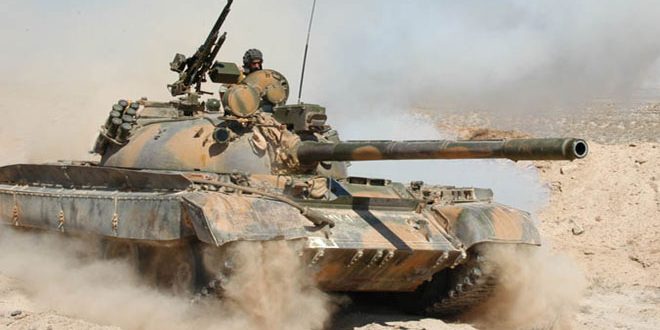 Provinces, SANA – Many terrorists have been killed or injured during the army’s continued operations against their positions in different provinces, with the operations also resulting in destroying tens of vehicles.

The army units, backed to by the Air Force, left scores of ISIS terrorists dead or injured after targeting their positions in al-Maqaber area and in the surroundings of the Military Airport and al-Tharda Mountain in Deir Ezzor.

SANA reporter in the eastern province said the army operations resulted also in destroying several dens and fortifications of the terrorists, in addition to destroying vehicles equipped with machineguns.

The reporter added that strong explosions were heard due to air raids targeting convoys of vehicles for ISIS in al-Bugheiliyeh village and in the surroundings of al-Tharda Mountain and al-Maqaber area as tens of vehicles loaded with weapons and ammunition were destroyed.

Ion a relevant note, SANِA reporter denied reports spread on social media claiming that ISIS has taken control of al-Furat University’s building, the faculties of Arts and Humanities and Agriculture and the dormitory in Deir Ezzor city, stressing that these reports are baseless.

Army units killed more than 15 of ISIS terrorists and destroyed an armored vehicle and 7 vehicles equipped with heavy machineguns to the south of Sharifa village in the eastern countryside of Homs.

Earlier, the army units operating in the T4 area made a new advance in the confrontation against ISIS terrorists to the south of the T4 military airport in the eastern countryside of Home.

A military source told SANA that the army established control on a number of important hills and points along the road of al-Phosphate, killing tens of ISIS terrorists and destroying their equipment.

Other army units, in cooperation with the supporting forces, carried out intensive operations targeting ISIS positions east of al-Qaryatain city in the direction of al-Barida village and its surrounding hills in which various types of heavy weapons were used.

The operations resulting in the army advancing in the area after leaving many ISIS terrorists dead or wounded, while the remaining ones fled towards al-Badia leaving their weapons behind.

Meanwhile, the army units protecting the Air force academy in Aleppo killed a number of ISIS terrorists and destroyed a munitions warehouse for them in Khasaf village in Der Hafer to the East of Aleppo.

Army operations 2017-01-19
h.said
Share
Previous Conclusion of signing a 10 km letter of loyalty to homeland celebrated in Aleppo
Next Moscow astonished at international silence towards the suffering of civilians in Deir Ezzor