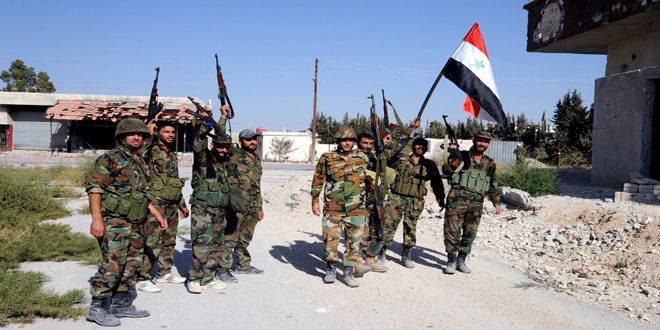 Provinces, SANA – The Armed And Armed Forces continued on Saturday carrying out counter-terrorism operaitons across the country, restoring security and stability to al-Foqai’a village in Daraa.

An army unit restored stability and security to al-Foqai’a village and its farms in the northern countryside of Daraa southern province and chased the fleeing terrorists in the area.

A military source told SANA that an army unit carried out a special operation against hotbeds and dens of Jabhat al-Nusra terrorists in al-Foqai’a town in the vicinity of the Old International Road to the north of Daraa city.

The source added that security and stability were restored to the town after killing a number of terrorists and the remnants fled away towards the neighboring areas.

Later, the source said the army units established control over the farms of al-Foqai’a town.

This new achievement by the army is very important as it helps in consolidating security on Daraa highway and provides a springboard for the army to restore security and stability to the villages and towns spreading on both sides of the old road linking al-Sanamin city with al-Sheikh Miskin city.

In the same context, the source confirmed that a number of Jabhat al-Nusra terrorists were killed or injured in an army operation that targeted their positions in al-Nazihin Camp and to the south of the old Customs’ building in Daraa al-Balad area.

An army unit destroyed a car transporting terrorists and ammunition in the surroundings of al-Tuffahiyeh village in the northeastern countryside of Lattakia.

Meanwhile, a vehicle equipped with a machine gun destroyed, a number of terrorists killed in a special army operation in the surroundings of Kafr Sendo town, 50 km northeast of Lattakia city.

A military source told SANA that the Syrian Air Force carried out intensive airstrikes targeting gatherings of terrorists in Madaya, Tarmala, Kafr Obeid, and Abdin in the counstryside of Idleb province, which resulting in eliminating a number of terrorists from Jaish al-Fateh and destroying their hideouts and armored vehicles.

In the northern countryside of Hama province, the Syrian Air Force eliminated a number of terrorists from Jaish al-Fateh and destroyed their bases and armored vehicles in al-Masasneh, al-Lahaya, Skik, and Uqairibat.