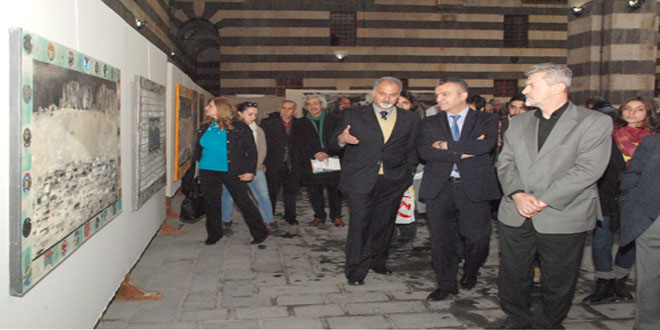 Damascus, SANA – Entitled “Six Years”, Nizar Sabour’s art exhibition was opened at Khan As’ad Basha. The exhibition showcases more than 120 artworks of different themes stemmed from the heart of the Syrian pain and suffering narrating stories of resistance, steadfastness and adherence to the homeland.

In a statement to SANA, Sabour said that the exhibition includes all art works of my own since 2010 up to date, adding that the first two paintings rose a question about if the intuition could tell anything about the future after which he worked on art as a witness of society and a way to defend life against death. 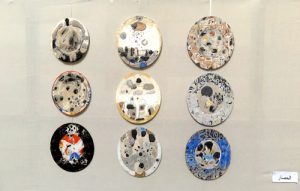 The exhibited paintings depicted details from certain stage in the Syrians’ life starting from the first days of the war on Syria and how it scattered our lives to the siege imposed on its people and the damage caused to archeological and sacred sites due to terrorists and ending with olive which symbolizes the steadfastness and unity of all Syrians.

Assistant Culture Minister Bassam Abu Ghannam noted that the exhibition contributes to enhancing the plastic art movement and stresses the artist’s ability to refuse what is taking place in his homeland.

Artist and critic Talal Moualla said that the black color in Sabour’s paintings reflects the pain and sorrow felt under the current circumstances while the bright colors express hope of better future. 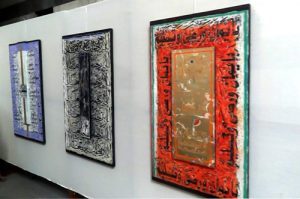