Coinciding with its achievements in Aleppo Eastern neighborhoods, the Syrian Army continues operations of evacuation of citizens and transporting them to safe areas 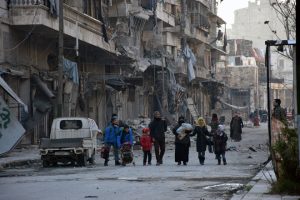 Aleppo, SANA- The Syrian Army continues the operations to evacuate the citizens from the armed terrorists-controlled eastern neighborhoods of Aleppo in coincidence with the quick advance it achieved in regaining control and restoring security and stability to those neighborhoods.

The army also is doing its best to allocate safe corridors to the locals and transport them to makeshift centers set by Aleppo governorate in Jibrin and Hanano Housings neighborhoods.

A number of citizens, who managed to escape the besieged neighborhoods, expressed pleasure and joy to reach the safe areas controlled by the Syrian army where all their needs have been provided.

Saed Shhadeh, who left al-Haidariyeh neighborhood and resided in Jibrin makeshift center, said that terrorists deprived his family from food and assistance, asserting that terrorists used the civilians as armored shields and shot them when they tried to leave those neighborhoods.

Abdullah Khalifeh, another citizen fled al-Ard al-Hamra ( the Red Land) besieged neighborhood talked about the psychological torture practiced by terrorists and the siege imposed on the locals where terrorists, including foreigner terrorists, opened fire on 40 families while they were trying to leave.

Um Abdo and girl child Hala Hassan Darraj expressed joy to reach the safe areas controlled by the Army personnel who offered them food and new clothes and other necessary needs.

In Hanano Housings, families started to return to their homes which were sabotaged, destroyed and robbed by the terrorists.

For his part, Member of Aleppo Governorate Council’s executive office Abdulghani Qassab said that comprehensive relief programs, makeshift centers and halls for the families were prepared in Jibrin and Hanano Housings neighborhoods as a medical and emergency team was qualified and all necessary needs including transportation, foods, potable water , medical centers equipped with all medical equipment, medicine and vaccinations were ensured.

According to Maso, two schools were prepared and equipped in Hanano housings in parallel with rehabilitating two schools to be put into service next week.

Over the past few days, thousands of citizens fled the terrorists-besieged eastern neighborhoods of Aleppo where terrorists were using them as armored shields.