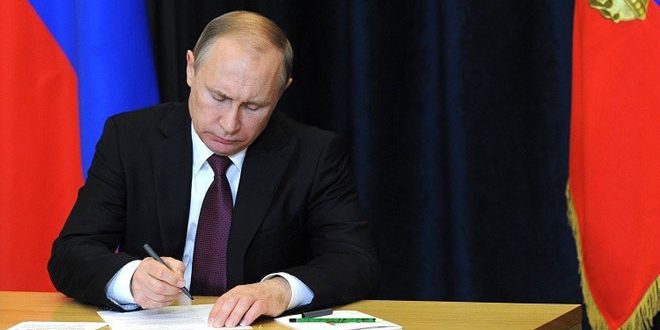 Moscow, SANA – Russian President Vladimir Putin discussed with permanent members of the Russian Security Council the situation in Syria, stressing the need to continue the humanitarian assistance to the civilians in Aleppo city.

Kremlin Spokesman Dmitry Peskov on Thursday said that the meeting dealt with several issues, including the implementation of the main provisions of the president’s address to the Federal Assembly.

He added that the Syrian affair was also on the table with emphasis on the need to continue Russia’s efforts to provide humanitarian aid to Aleppo people.

Earlier today, Putin signed a new Russian foreign policy strategy which underlined the need to reach a settlement to the crisis in Syria that is based on preserving its unity, independence and territorial integrity.