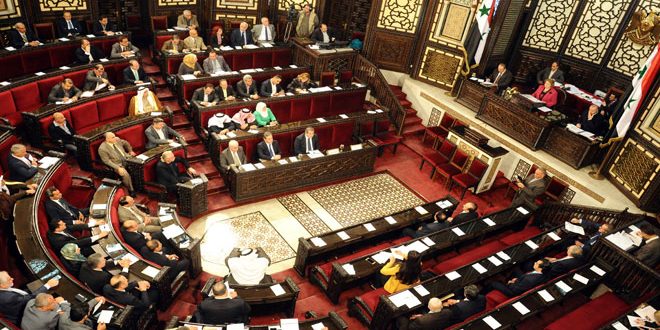 Damascus, SANA-People’s Assembly approved during its session, headed by Speaker Hadyiah Abbas, a bill on transferring the property of al-Asaad University Hospital in Lattakia to the Ministry of Defense and it became a law.

The Assembly also approved a draft law on the work of sworn translators and it became law, stating that they will be allowed to practice the profession only after obtaining an official license.

The MPs focused on the performance of the Economy and Foreign Trade Ministry and issues related to its work, calling on the ministry to explain its vision about promoting the national economy and meeting the basic needs of citizens.

For his part, Minister of Economy and Foreign Trade Adib Mayyaleh pointed out that the ministry is working to draw up real economic policies that commensurate with the requirements of the current crisis and the reconstruction phase, indicating the importance of supporting the components of the national economy, focusing on small and medium enterprises and activating the role of the authorities concerned in this field which will yield tangible results soon.

He pointed out that the production process is witnessing a remarkable stability after the issuance of the decision that allows importing raw materials, adding that the ministry is working on creating villages for Syrian exports in the friendly countries as all necessary measures have been taken to launch a village for Syrian exports in Russia.